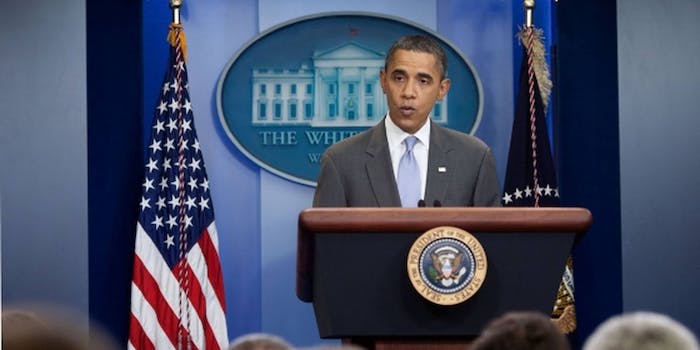 For his final press conference of 2014, President Barack Obama decided to do something that raised more than a few eyebrows and it wasn’t just that he called Sony’s decision not to release The Interview a “mistake.”

Kicking off the press conference, Obama took out a sheet of paper and said, “Now [White House Press Secretary] Josh [Earnest] has given me the who’s been naughty and who’s been nice list, and I’m going to use it to take some questions.”

It turned out that list only contained the names of women.

It’s also notable that all of the reporters called by the president on Friday worked in print rather than in television. In most press conferences, the people who get to directly question the president largely come from predominantly male, predominantly TV reporters who sit in the first couple rows.

“The fact is, there are many women from a variety of news organizations who day-in and day-out do the hard work of covering the President of the United States,” Earnest told Time following the event. “As the questioner list started to come together, we realized that we had a unique opportunity to highlight that fact at the president’s closely watched, end of the year news conference.”

Near the end of the event, a male reporter called out to Obama asking if he had any New Year’s resolutions. The president ignored the question and instead called on American Urban Radio reporter April Ryan.

The move immediately inspired a strong positive reaction on Twitter:

@EverydaySexism US media goes nuts bc Obama only answers questions from female press corp. If only males had the floor, it wouldn't be news

All female reporters called on by Obama. Trolling the right like a boss.

The questions did seem more intelligent and focused than usual.

"and kids, this is how the War on Men began…"