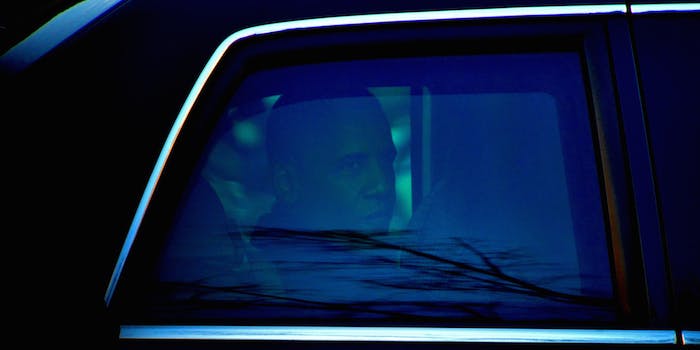 This is what shooting down the middle looks like.

President Barack Obama laid out a case on Thursday for sweeping reforms that will temporarily spare roughly 4 million immigrants from deportation. The response to the use of executive action has varied widely, from celebratory to hostile, and with criticism emanating from all sides of the political spectrum.

“We were strangers once, too,” the president said in emotional, 10-minute speech that outlined his plans for immigration reform. The executive action will apply to the millions of undocumented parents of legal American citizens who’ve lived in the country for more than five years. It will not help them on their path to citizenship, President Obama emphasized, and the relief from deportation only applies for three years.

“But even as we focus on deporting criminals, the fact is, millions of immigrants—in every state, of every race and nationality—will still live here illegally. And let’s be honest—tracking down, rounding up, and deporting millions of people isn’t realistic. Anyone who suggests otherwise isn’t being straight with you. It’s also not who we are as Americans.”

At the top of the president’s three-part plan sits an increase in border security. “Felons, not families. Criminals, not children. Gang members, not a mother who’s working hard to provide for her kids,” the president offered. “We’ll prioritize, just like law enforcement does every day.”

The executive order would allow less than half of the estimated 11 million unauthorized immigrants that currently reside in America to seek protection. Each will be required to register with the government, pass a criminal background check, and pay their fair share of taxes. “You can come out of the shadows and get right with the law,” the president said.

Neither the provisional nature of the executive order nor its emphasis on law enforcement expansion could persuade the president’s most vocal critics, such as Senator Ted Cruz (R-Tx.), who took issue with Obama’s unilateral action rather than the content of his move.

“It is lawless. It is unconstitutional. He is defiant and angry at the American people,” Cruz said in press release. “If he acts by executive diktat, President Obama will not be acting as a president, he will be acting as a monarch.”

Cruz divulged online his strategy for combating the president’s actions in a link on his Facebook page shortly after the speech. Once Senate Republicans become the majority party in January, Cruz demands a filibuster of all the president’s executive and judicial nominations, save those not essential for national security purposes.

Among the confirmations Cruz intends to delay are three nominated for judgeships in the U.S. District Court for the Southern District of Texas. “Our judicial system depends on well-qualified judges to uphold the Constitution and the rule of law,” Cruz said last September, when he recommended those nominees to the White House. One of the five benches in that district waiting to be filled has been vacant since before Cruz’s term began in Jan. 2013.

“It is lawless. It is unconstitutional. He is defiant and angry at the American people.”

Additionally, Cruz suggested that Congress should authorize funding for government agencies one at a time, as opposed to passing a single budget, while attaching riders to strip President Obama’s authority “to grant amnesty.”

“If the President is unwilling to accept funding for, say, the Department of Homeland Security without his being able to unilaterally defy the law,” Cruz predicted, “he alone will be responsible for the consequences.”

Cruz’s statement avoided mentioning by name Sen. Mitch McConnell (R-Ky.), the incoming Senate majority leader. Since Republicans seized control of the Senate during the Nov. 4 general elections, Cruz has been unwilling to commit to supporting McConnell. However, the power to deter the president from lawlessness, Cruz wrote, “is the constitutional power of the Majority Leader alone.”

A week ago, McConnell stressed: “We will not be shutting the government down or threatening to default on the federal debt.” That promise runs contrary to plans hatched by Tea Party politicians, such as Rep. Steve King (R-Iowa), who, when asked if he’d consider a government shutdown, told reporters: “When you take an oath to uphold the Constitution, it is not appropriate to contemplate the political consequences. You should uphold the Constitution come what may.”

Congress has until midnight on Dec. 11 to pass a spending bill that would keep the government functioning, the result of a short-term bill that passed in September. Republicans like Cruz and King, however, are now calling to defund the part of the budget that would affect the president’s executive action. Problem is, the department primarily responsible for implementing the reforms, the U.S. Citizenship and Immigration Services (USCIS), is self-funded by fees it collects on various immigration applications. USCIS’s parent agency is the Department of Homeland Security.

“The [USCIS] has the ability to continue to collect and use fees to continue current operations, and to expand operations as under a new Executive Order, without needing legislative approval by the Appropriations Committee or the Congress, even under a continuing resolution or a government shutdown,” House Appropriations Committee Chairman Hal Rogers (R-Ky.) said in a statement on Thursday.

Obama: There are too many illegals for use to even try enforcing the law…but we can force 200 million people to buy health insurance.

While Republican leaders, such as House Speaker John Boehner (R-Ohio)—who hired a third attorney this week to sue the president over the Affordable Care Act—characterized the executive action as unlawful, king-like behavior, some progressive proponents of broad immigration reform attacked the president’s strategy as cursory and deficient.

A statement by the American Civil Liberties Union (ACLU) professed chagrin at the president’s decision to boost law enforcement powers during what it termed the height of a “crisis of abuses” by Customs and Border Protection. “The White House is requesting more border-security resources, more boots on the throats of border residents,” said ACLU Executive Director Anthony D. Romero.

During President Obama’s six years in office, approximately 400,000 people have been deported per year, a pace higher than that of any previous administration.

Deporting felons not families? What about the moms & kids fleeing violence who are held in immigration jails? #ImmigrationAction

“We are extremely concerned about the rights of all 6 million immigrants excluded from deportation relief, including those who are long-standing neighbors in our communities,” Romero continued. “Today’s executive actions will also result in more militarization in Southwest border communities, without increasing accountability measures for Customs and Border Protection, the nation’s largest and most dangerous police force.”