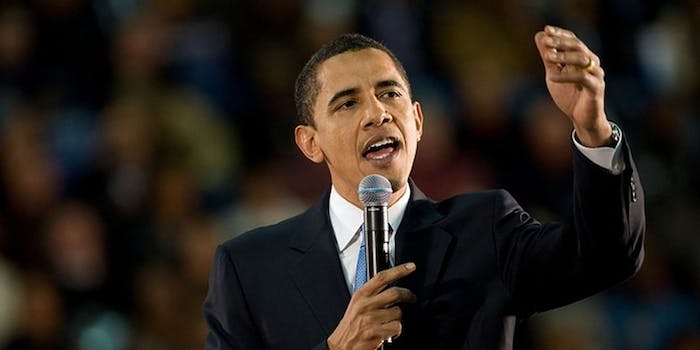 At this point, it seems like almost everyone in the known universe has taken the ice bucket challenge. Dumping a bucket of ice water on your head to raise money for ALS—or, you know, not raise money for ALS—has become the most popular social media fad since #Kony2012, but this one actually has most people doing something more substantial that hitting ?like” on Facebook.

However, not everyone has gotten in on the act.

Last week, President Obama was challenged by an 86-year old Kennedy family matriarch, but he politely declined. Instead of following the lead of most people on the Internet and writing a thinkpiece about it, the president elected to simply cut a check.

While his predecessor in the White House recently took a break from painting charmingly childish pictures of his dogs to dump a bucket of ice water on his head, Obama thought better of having a video of the most powerful man in the world being deluged with ice water out there on the Internet forever. Doing so would violate a piece of advice that Obama gave last year when he similarly declined an offer to try on a custom-fitted Navy football helmet during a ceremony honoring the schools football team:

“Here’s the general rule: You don’t put stuff on your head if you’re president. That’s Politics 101. You never look good wearing something on your head.”

The president may only have a 43 percent job approval rating, but it can’t be said he doesn’t have keen political instincts. If they were given a clip of the president with ice water on his head, Republican operatives would have a field day making attack ads for the midterms this fall. “Trapped betwen Iraq and a hard place, the president’s foreign policy is all wet.” Basically the ads would write themselves.

In addition, the State Department has circulated a letter saying that federal law prohibits top-ranking governmnet officals from participating in the ice bucket challenge. House of Representatives ethics rules similarly bar members of Congress from using official resources for the same purpose. These regulations are in place to avoid the appearance of favoritism and have had the effect of causing some officials to take down their own ice challenge videos.

Anyway, there’s a long history of politicians being caught in embarrassing photos with dumb stuff on their heads, situations the president has thus far proved adept at avoiding. Here are five reasons why Obama made the smart move.

1) Michael Dukakis vs. the tank

In September of 1988, Democratic presidential nominee Michael Dukakis traveled to a facility in Michigan operated by military contractor General Dynamics for a campaign stop where he would ride around in a 68-ton M1A1 Abrams Main Battle Tank. According to a recent Politico post-mortem on the event, the sight of the diminutive Massachusetts governor flashing a thumbs up with an oversize army helmet emblazoned with his name across the front caused the nearly 100 reporters in attendance to erupt into uncontrollable laughter. The guffaws were an omen. The footage was turned into an instantly iconic ad by his opponent, George H. W. Bush, who went to on to crush Dukakis in the general election.

2) John Kerry and the clean suit

For most of his ultimately unsuccessful campaign to unseat George W. Bush, John Kerry tried really hard not invite comparisons to Michael Dukakis. Both man may have been Massachusetts Democrats, but Kerry was a war hero and spent the final weeks of the campaign trying to burnish a macho image by donning camo for a hunting trip photo op. However, whatever goodwill with swing voters Kerry gained from pretending to awkwardly shoot guns at animals, he couldn’t overcome pictures of the then-presumptive Democratic nominee looking like a huge nerd while wearing a bright blue ?clean suit” during a tour through a NASA facility in Cape Canaveral, Fla..

Kerry put something on his head that wasn’t a baseball or cowboy hat and, as a result, looked silly. His political opponents jumped on the opportunity. The New York Post compared the picture to shots of Woody Allen dressed as a sperm in the film Everything You Always Wanted to Know About Sex (but Were Afraid to Ask) and blared the headline, ?Boston, We Have a Problem.”

Kerry’s campaign called the release of the photo a ?dirty trick” and went on to lose the election.

In the heart of a 2010 reelection race, Iowa Gov. Chet Culver flew to Iraq to visit the troops. While the Democrat was dinged for leaving the state in the middle of a legislative session, the biggest problem with the trip was probably that it resulted in photos of him dressed up in army fatigues that, charitably, look like a chubby 8th grader wearing a bad army man Halloween costume.

While 2010 was a tough year for Democrats across the board. Culver was ousted by GOP challenger Terry Branstad in November.

For some reason New York Assemblyman Dov Hikind thought it was a good idea last year to dress up for a Purim party in an afro wig and blackface. He then thought it was an even better idea to defend himself by saying, ?I was just, I think, I was trying to emulate, you know, maybe some of these basketball players,” managing to not just look ridiculous but also racist.

Note to all aspiring politicians: Don’t do that. All of the things that Hikind did were dumb things to do.

The mayor of New York City isn’t afraid to dive into his costume closet. He’s worn a rainbow tie while riding in a gay pride parade and, as pictured above, put on a pirate hat for a carnival in Brooklyn. Unlike most other politicians, de Blasio pulls it off because dressing like a pirate and marching in a hipster parade legitimately seems like what he would wearing and doing even if he weren’t mayor. He makes it look natural and, as a result, the mayor’s costume choices are probably only embarrassing to his kids. De Blasio is the exception that proves the rule.