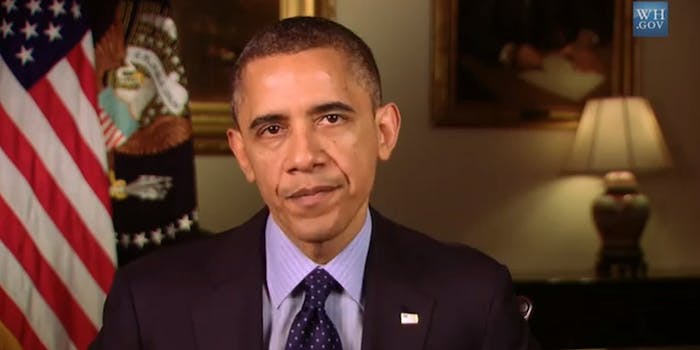 Obama responds to gun control petitions: “We hear you”

The president took to YouTube to address the 32 different petitions about gun control launched in the wake of the Sandy Hook shooting.

President Obama has responded to 32 separate petitions calling for gun control reform in the wake of the Sandy Hook Elementary School shooting in Newtown, Conn.

The petitions starting appearing on the We the People website almost immediately after news of the rampage broke last Friday, and they range in topic from mental health reform to gun control legislation. More extreme petitions call for putting a gun in every classroom and, conversely, repealing the Second Amendment.

The president addressed the petitions in a YouTube video posted to the official White House channel earlier Friday, with a clear message to the hundreds of thousands who signed those petitions: “We hear you.”

“It’s encouraging that many gun owners have stepped up this week to say there are steps we can take to prevent more tragedies like the one in Newtown,” Obama said. “Steps that both protect our rights and protect our kids.”

In a press conference on Wednesday, Obama already called on Congress to pass a number of laws he would push through, which include banning the sale of military-style weapons and high-capacity ammunition clips and requiring background checks for anyone who wants to purchase a gun. He also appointed Vice President Joe Biden to head a committee to come up with proposals by January and promises to push them in Congress.

Bruce Reed, the vice president’s chief of staff, worked with Biden before to pass the ban on assault weapons and Brady Handgun Violence Prevention Act, felt the need to respond personally to the petitioners.

“An issue this serious and complex isn’t going to be resolved with a single legislative proposal or policy prescription,” Reed wrote. “And let’s be clear, any action we take will respect the Second Amendment.”

The president doesn’t list specific goals he didn’t already cover in the press conference, but he notes that if he is to succeed, he needs suppoert.