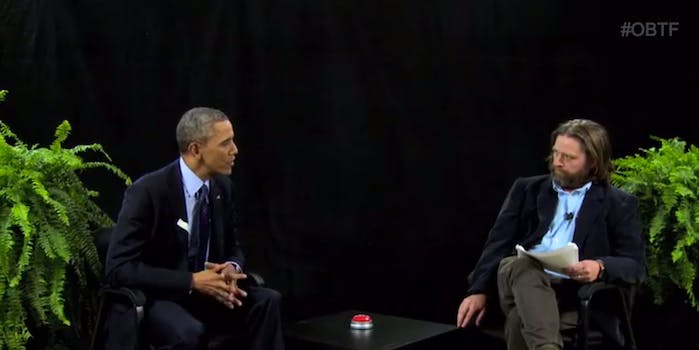 Obama’s stint with Zach Galifianakis drove a ton of traffic to Healthcare.gov

President Obama's appearance on Zach Galifianakis' webseries was the top referrer to Healthcare.gov at one point.

Some old pundits got their Depends in a twist thinking that appearing on an Internet-based program that uses a different style of humor was beneath the office of the president (as though trading dorky quips with David Letterman is somehow more dignified just because it’s been done before).

But even if Abe Lincoln wouldn’t have been game to savor the long-pause, confrontational interview stylings of Galifianakis, Obama was, and it worked: The Funny or Die-hosted clip was the top driver of traffic to Healthcare.gov.

Tara McGuinness, a senior communications adviser who focuses on the Affordable Care Act, tweeted about the clip’s success:

Funnyordie video has 11 million views. http://t.co/a7HUExG0vg traffic for yesterday was up almost 40% from Monday.

“The president’s interview with Zach Galifianakis in Between Two Ferns was meant to reach Americans where they live,” White House press secretary Jay Carney told the press, emphasizing that the White House is looking for creative ways to get its message across.

Hourly traffic up from yesterday. @funnyordie video referrals at 32k and 575k site visits as of 6pm. #GetCoveredNow

890k+ visits to http://t.co/zGLCNOxaSv on Tues, up 40% from Mon. Lots of consumers shopping to get covered before 3/31. #GetCoveredNow

In case you missed it: