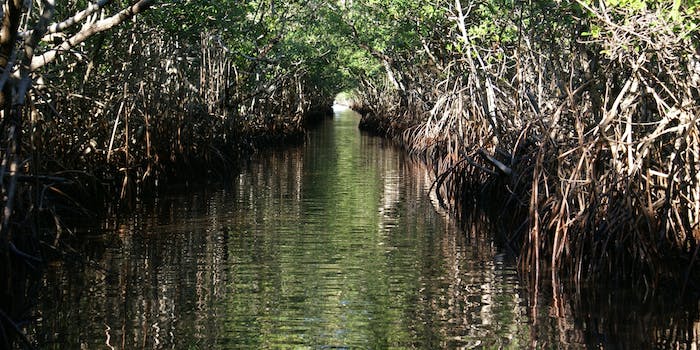 President Obama celebrates Earth Day with a visit to the Everglades, irony abounds.

Protecting the environment is important to our president. But he sure has a funny way of showing it.

In his weekly video address to America, President Obama said Wednesday, Earth Day, is “a day to appreciate and protect this precious planet we call home and today there is no greater threat to our planet than climate change.” Obama further noted that 2014 was the warmest year on record and that 14 of the 15 hottest years have all fallen in the first 15 years of this century. And he passed on Pentagon’s warning that climate change poses an immediate threat to our national security.

President Obama then announced that, to celebrate Earth Day, he’d be taking Air Force One to visit the Florida Everglades. And who better to accompany Obama on his adventure to advocate for the environment than everyone’s favorite celebrity scientist (when Neil DeGrasse Tyson is already booked) Bill Nye.

Heading down to DC to catch an #EarthDay flight on Air Force One tomorrow with the President. We're going to #ActOnClimate.

An Earth Day outing to the Everglades seems like a great way to raise awareness about climate change, but let’s think about that for a moment. Google Maps calculates the distance between the White House and the Everglades at approximately 1,000 miles. Air Force One is a modified 747. How Stuff Works found that, when there are 500 people on a 747, the it’s actually pretty fuel efficient, and you get around 100 miles per gallon per person. But when it’s basically just Barack Obama, Bill Nye, and some staffers on board, the math is less generous. The plane burns about five gallons of fuel per mile, so the approximately 2,000-mile roundtrip would burn somewhere in the neighborhood of 10,000 gallons of jet fuel, which checks out with CBS News White House reporter Mark Knollers’ ballpark estimate.

That’s almost 90 metric tons of carbon. The green house gas emissions of the trip are equivalent to burning 95,000 pounds of coal or consuming 207 barrels of oil, according to the Environmental Protection Agency. And that’s to say nothing of the presidential motorcade or any other aspect of the trip.

“The everglades is one of the most special places in our country, but it’s also one of the most fragile,” Obama said before burning four tons of jet fuel on a one day trip to Florida to discuss how climate change caused by carbon emissions is affecting the national park’s ecosystem.

#ClimateChangeIsReal. So are the actions President Obama is taking to tackle it. pic.twitter.com/63jKisj8ZS

Even Bill Nye the Science Guy caught flack in the press for flaunting his excitement and his greenhouse gas emissions on Twitter.

That said, the excitement, much like #ClimateChange, is real.

“Global projections suggest south Florida wildlife will need to contend with higher temperatures, drier conditions, and rising seas in the years ahead. Recent modeling efforts shed new light on the potential outcomes these changes may have for threatened and endangered species in the area,” reads an infographic on the National Parks Services website.

Rather than advocating for the protection of the delicate ecosystem and the endangered species who inhabit it, however, President Obama said he was visiting the Everglades “to talk about the way climate change threatens our economy.”

The Obama administration has made a huge impact on environmental policy during the president’s time in the oval office. Last November, he brokered a deal with China to help curb the nation’s carbon emissions. In February, the president used his executive power to veto the Keystone pipeline in response to pressure from environmental activists. And last month, in response to asthma rates nearly doubling in recent years, the White House unveiled initiatives to examine to public health impacts of global warming on Americans.

So why would our eco-conscious executive celebrate Earth Day by jet-setting to the Everglades to ironically advocate for cutting back carbon emissions in the face of climate change? Perhaps because the Everglades is a national treasure nestled in a land of climate-deniers hell bent on economic development, and any attention Obama can bring to the plight of the environment is attention the area desperately needs.

The irony in our approach to climate change doesn’t begin and end with the executive office. Despite Florida being one of the states most at-risk by rising sea levels, Republican Gov. Rick Scott allegedly imposed a ban on discussing the oncoming danger, declaring a moratorium on the terms “climate change,” “global warming,” and “sustainability,” forcing Florida legislators to stick their heads in the sand on issues of the environment.

“Those Republicans who deny the reality of climate change do so to the detriment of the people they’re elected to represent,” Obama press secretary Josh Earnest said to Politico magazine. “The failure to confront that reality is a failure of leadership.”

In contrast to his refusal to countenance climate change, however, Gov. Scott is ostensibly committed to preserving the precious ecosystem of the Everglades.

Governor Scott is committed to preserving the Everglades. #yourflorida pic.twitter.com/BODShfqWPL

In a call with the Daily Dot, Jeri Bustamante, Scott’s press secretary, held to Scott’s line that allegations of the global warming-related word ban are “not true” and that no such policy existed. When asked why two separate Florida Department of Environmental Protection employees would claim they were told not to use those terms, she said, “Again, I can only tell you that Gov. Scott says that is, quote, ‘untrue.'”

Perhaps Obama’s interest in the economic impact of climate change on the region is because Scott’s interest in the area seems purely financial. Politico reports on how the Everglades is the only issue on which Scott and Obama have been able to find common ground. Only the green Scott seems concerned with isn’t the environmental kind.