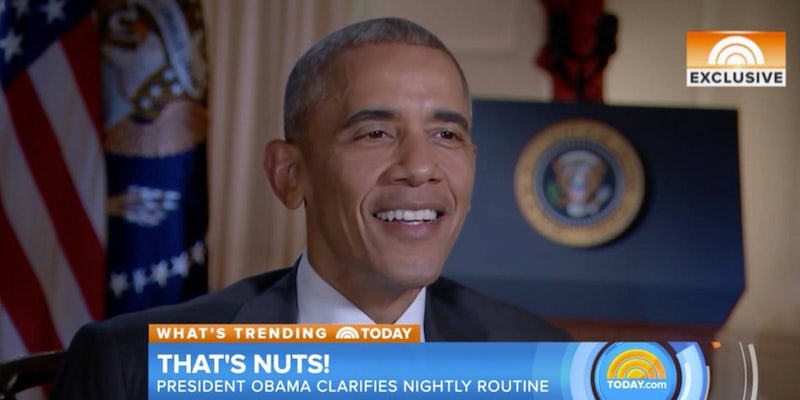 Everyone can stop eating exactly seven almonds now in hopes of having at least one thing in common with President Barack Obama.

I now feel guilty if I have more than 7 almonds. Thanks, Obama pic.twitter.com/D1PBa6wwlZ

I am having 7 almonds right now, just like Obama.

In an interview that aired Thursday on Today, the president confirmed that he’s not super particular about the exact amount of nuts he consumes each night, as the New York Times previously claimed he was.

“A lot of people were interested to learn that you have a late-night snack every night of exactly seven almonds,” Savannah Guthrie said to Obama. “Why not eight?”

Obama then preceded to set the record straight.

Obama says he sometimes eats as many as 10 or 11 almonds. I have no idea what’s real anymore https://t.co/210TthJarF

“Well, this is an example of the weird way that the press works,” Obama said. “So, Michelle and Sam Kass—who was our chef here—one night they were talking about me and teasing me about how disciplined I was, that I didn’t have potato chips or I didn’t have a piece of cake.”

Obama continued: “And this is when Michelle said, ‘Yes, and he just has seven almonds. That’s it.’ To really drive home the point that I needed to loosen up a little bit. And Sam relayed this joke to the New York Times in the article, and somehow it was relayed as if I was counting out … the seven almonds.”

Don’t worry, POTUS fans. Obama still loves almonds, he just doesn’t count out how many he eats each day. And if you’re looking to feel like a tad bit closer to the president himself, keep munching and treat yourself to more than seven almonds a night.

“Almonds are a good snack. I strongly recommend them,” Obama said. “I am so glad I had this opportunity. … This has been really weighing on me.”