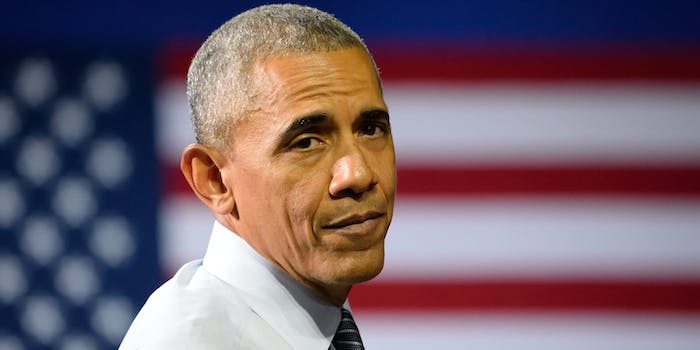 Former President Barack Obama called on Congress to have  “courage” following the House of Representative’s recent efforts to repeal and replace the Affordable Care Act, his signature domestic policy achievement.

Speaking at the John F. Kennedy Library in Boston on Sunday night, Obama’s comments were the first he has made since the house voted on the controversial American Health Care Act (AHCA).

“I hope that current members of Congress recall that it actually doesn’t take a lot of courage to aid those who are already powerful, already comfortable, already influential,” Obama said, “but it does require some courage to champion the vulnerable, and the sick and the infirm—those who often had no access to the corridors of power. I hope they understand that courage means not simply doing what is politically expedient, but doing what they believe, deep in their hearts, is right. This kind of courage is required from all of us.”

While not speaking directly about the Republican’s plan to repeal and replace the Affordable Care Act, Obama continued to focus on courage as part of his speech following his acceptance of the 2017 John F. Kennedy Profile in Courage Award.

According to the John F. Kennedy Presidential Library and Museum’s website, the award is meant to recognize public officials who “demonstrate the qualities of politically courageous leadership.”

“It is my fervent hope, and the hope of millions, that regardless of party, such courage is still possible,” Obama said. “That today’s members of Congress, regardless of party, are willing to look at the facts and speak the truth, even when it contradicts party positions.”
The House narrowly passed the American Health Care Act on Thursday, where it is expected to meet resistance in the Senate.