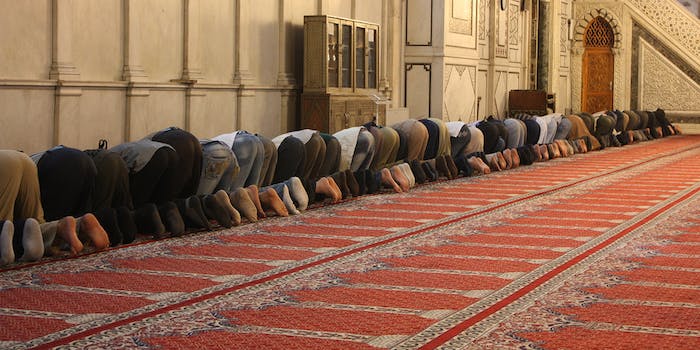 The dormant program was created by the Bush administration in the wake of 9/11.

If President-elect Donald Trump wants to build a Muslim registry, he will have to start over from scratch.

The Obama administration issued a new rule on Thursday that would eliminate a post-9/11 program that required non-immigrant Muslim men over the age of 16-years old to be photographed and fingerprinted. Known as NSEERS, or the National Security Entry Exit Registration System, the policy was created by the Bush administration in 2002 but hasn’t been in place since 2011. Civil rights groups such as the ACLU and the Council for American-Islamic Relations have long fought for the elimination of NSEERS, arguing that it creates a chilling effect among Muslim communities.

The ruling comes only a day after terrorist attacks in Berlin led to President-elect Donald Trump reiterating his controversial campaign promise to build a Muslim registry.

“You know my plans,” Mr. Trump said to reporters on Wednesday. “All along, I’ve been proven to be right. One hundred percent correct.”

Trump didn’t clarify what his “plans” entailed or what exactly he was right about.

“You’re going back to over a year ago in what he said about the [Muslim] ban versus what he said later about it, when he made it much more specific and talked about countries where we know that they’ve got a higher propensity of training and exporting terrorists,” Conway told CNN’s Chris Cuomo during an interview on New Day.

NSEERS didn’t affect U.S. citizens, permanent residents, or those who were applying to settle in the United States permanently under a visa program. It widely affected students and those on temporary work visas. As the AIC noted, many of these Muslim immigrants typically drive taxis, run newsstands, and work in restaurants and gas stations.

“The people who suffered most were the poor immigrants, those who had been in the country less than five years,” said Ehsan Imdad, president of the Bangladesh Association of New York in the AIC report.

The NSEERS program registered and monitored more than 80,000 men and boys in its nearly 10-year existence, according to a 2012 report by the Penn State Law and Rights Working Group. More than 13,000 of those individuals were put in deportation proceedings.

Critics of NSEERS often point out that the program did not result in the capture of a single terrorist in its duration.

James W. Ziglar, who served as commissioner of INS, told the New York Times in 2004 that he and members of his staff had doubts that the Muslim registry would be effective counterterrorism policy.

“The people who could be identified as terrorists weren’t going to show up. [NSEERs] was a huge exercise and caused us to use resources in the field that could have been much better deployed,” said Ziglar.

“NSEERS was a completely failed counter-terrorism tool and massive profiling program that didn’t yield a single terrorism conviction in nearly a decade. The ACLU applauds the Obama administration for terminating NSEERS for good. With this action, the U.S. is on the right path to protect Muslim and Arab immigrants from discrimination.”

But further obstacles lie ahead for civil rights advocates. Although NSEERS will be eliminated under the DHS rule, the Trump administration can work toward building a new one. Major technology companies such as Facebook, Google, Apple, and Uber have promised not to build a Muslim registry. But many technology companies and data brokers, which collect personal details on individuals available for purchase online, have declined to comment.

CNN Tech noted that Oracle CEO Safra Catz will soon join the Trump transition team while remaining at the company. Catz has declined to comment on whether Oracle, which owns BlueKai and DataLogix, will help build a new Muslim registry. Oracle paid $1.2 billion last year to acquire DataLogix, a market intelligence firm that has data assets on 110 million U.S. households and whose clients include Pepsi, Ford, Kraft, Facebook, Google, and Twitter.

“We are facing another ‘ism,’ just like we faced Nazism and fascism and imperialism and communism,” Flynn said. “This is Islamism, it is a vicious cancer inside the body of 1.7 billion people on this planet and it has to be excised.”