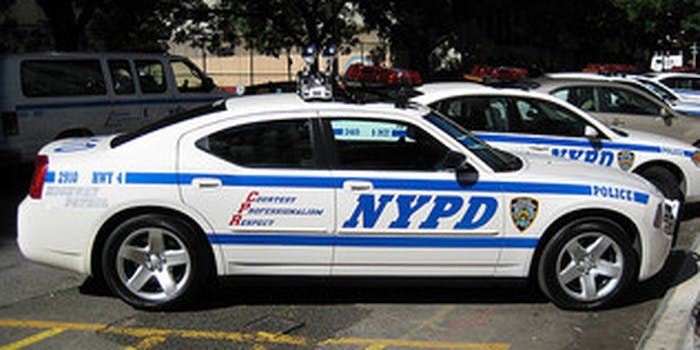 Even the NYPD is getting on the Google Glass bandwagon

“Anything you say can and will be used against you, and also recorded with my futuristic headband.”

A ranking official told Venture Beat that the intelligence and analytics unit of the country’s largest police department “signed up, got a few pairs of the Google glasses, and we’re trying them out, seeing if they have any value in investigations, mostly for patrol purposes.”

A pretty blasé reveal, but don’t let that fool you: This is a big deal. The NYPD wants to use every tool at its disposal to prevent crime, so adopting Glass is the next logical step in for a department that’s already embracing social media and deploying Android smartphones to hundreds of officers, along with a corresponding app that helps them access police databases with unprecedented speed.

The NYPD is also currently testing a “smart car” with infrared scanners that record every number, from license plates to addresses, so police can quickly identify stolen cars, among other things. The scanners also test for radiation levels and send all data back to a command center. There’s just a prototype out now, but the department is interested in using this type of smart police cruiser, which could also include livestreamed video, or even facial recognition and fingerprint scanning technologies.

So jumping from these technology initiatives to Glass is no great leap. However, the beta testing will certainly raise privacy concerns, especially if the department decides to adopt Glass on a larger scale. While facial recognition apps are currently barred from Glass, the technology exists. An app called Nametag is already creating databases of millions of people so Glass users can scan the faces of strangers and learn more about them.

So, not only is facial recognition possible, but the only thing stopping it is Google. If police could scan people on the street and assess their digital profile to determine whether to stop them, it would greatly complicate the idea of probable cause.

The NYPD is not the only police department joining the Glass Explorer Program. Although VentureBeat confirmed that San Francisco’s police are not yet glassholes, police officers in Byron, Ga., have tested Glass as a policing tool. And while they don’t use Glass, San Diego police use mobile facial recognition software similar to Nametag.

Bill Switzer, the product manager for Cop Trax—the company that made the Glass tools for the Georgia officers—believes it will change police work for the better. “Firstly it provides a higher degree of officer safety and second it provides transparency of officer behavior to the public,” he told the Daily Dot in an email.

Not everyone is as convinced that Glass use will bring about a new era of cop greatness.

“These sorts of things have pros and cons to them. It’s really a matter of finding a way to balance those pros and cons,” EFF staff attorney Hanni Fakhoury told the Daily Dot. Fakhoury noted that Glass could keep police accountable for their actions. “If they do something they’re not supposed to do, we can see it,” he pointed out. In that way, Glass could potentially curtail police abuses. But that doesn’t mean it’s not a matter of concern.

“The potential privacy intrusion, the idea that people walking on the street can have their records run just because the cops want to take a look at them, is pretty troubling,” Fakhoury said. “Especially considering the NYPD’s history.”

Google is not working directly with the NYPD, and told VentureBeat that the department likely acquired Glass through the Explorer Program. “Anyone can sign up to become a Glass Explorer, provided he or she is a U.S. resident and over the age of 18,” Google wrote.