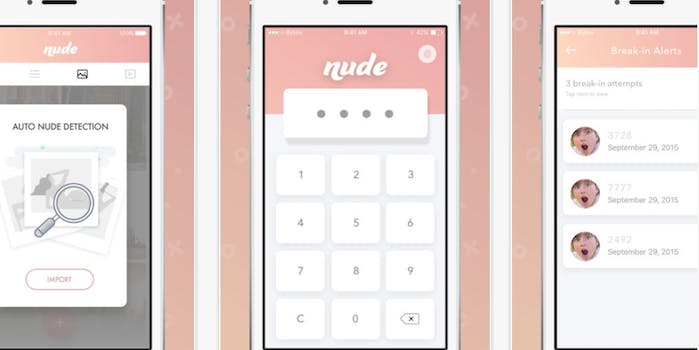 Do you trust this app that claims to scan and safely store your nudes?

The machine learning takes place directly on your device, not in the cloud.

It’s the nightmare scenario anyone stresses over—a friend or family member grabs your phone, flips through your photos, and finds something racy you either forgot or were too lazy to delete.

Fortunately, a new app tellingly named Nude: The Sexiest App Ever could save you from eternal embarrassment. Using some magical machine learning, “Nude” scans your phone for photos of your naked self and automatically stores them in a private vault after deleting them from your camera roll and cloud services like iCloud and Google Photos. Nude will either scan in the background as your camera roll gets updated with new images or once you manually open the app.

You can only gain access to those photos if you can verify your identity using your device’s built-in fingerprint sensor or PIN number. Once inside, you can take pictures of yourself (or less naughty things like your driver’s license or credit cards) that get saved only on the app. Nude will even use your front-facing camera to take an image of anyone trying to break into your device.

There will undoubtedly be privacy concerns surrounding an app that scans all of your images and grabs only the ones you want to prevent people from seeing. That said, the app claims all the photo analysis and storage happens directly on the device, not in the cloud, which means they’re never sent to a server.

The app is available now in the iOS store and will be coming to Android soon. It costs $1 a month or $10 annually to store images, a small expense for peace of mind.