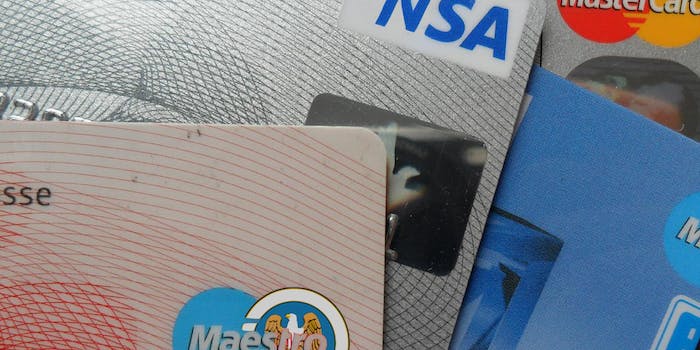 But VISA denies the agency has a backdoor into its systems.

“Follow the money” isn’t just a method to track corruption to its roots. It’s also the way the National Security Agency secretly tracks who’s spending what.

The latest leak from former NSA contractor Edward Snowden shows that the agency really does have an entire branch—and it’s actually called “Follow the Money”—devoted to secretly tracking financial transactions around the world.

The documents, obtained by Der Spiegel, show that the program largely tracks credit card transactions. As of 2011, they made up 84 percent of FTM‘s 180 million records, which are stored in a database called Tracfin.

Visa is the only credit card company directly named in the report, though it’s possible other companies’ transactions are similarly tracked. Unlike with most of the leaks Snowden provided to the Guardian and Washington Post, Der Spiegel didn’t immediately publish the NSA documents.

In a statement to the paper, Visa offered a sentiment similar to the ones Google and Yahoo made when the world first learned their customers’ communications were gobbled up by the NSA’s PRISM program: we’re not knowingly providing user information except when legally required.

We are not aware of any unauthorized access to our network. Visa takes data security seriously and, in response to any attempted intrusion, we would pursue all available remedies to the fullest extent of the law. Further, its Visa’s policy to only provide transaction information in response to a subpoena or other valid legal process.

It’s not immediately clear how the NSA would get this information, though other leaks have shown that the NSA’s legal requests for information are almost always granted, that it has enormous power to track most of the world’s Internet activity, and that it has the ability to break encryption previously thought unbreakable.

In addition to credit card transactions, the report also states that the NSA gets information from the Society for Worldwide Interbank Financial Telecommunication, a Brussels-based network. According to its website, through SWIFT,

The financial world conducts its business operations with speed, certainty and confidence. More than 10,000 banking organisations, securities institutions and corporate customers in 212 countries trust us every day to exchange millions of standardised financial messages.

SWIFT did not immediately respond to the Daily Dot’s request for comment.