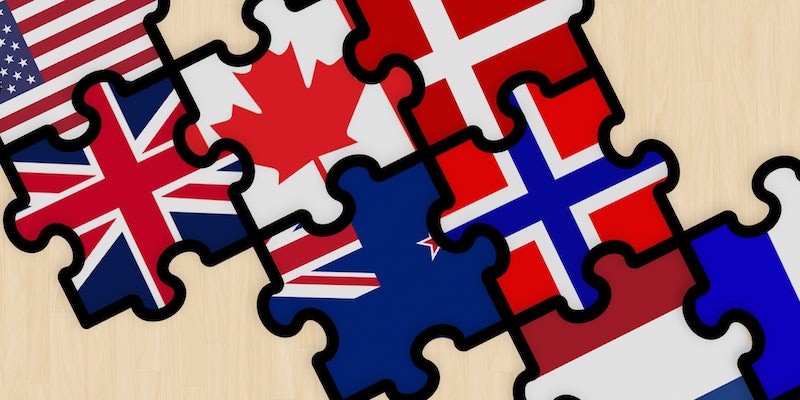 New reports from the New York Times and the Guardian show that the National Security Agency has at least three formal, concentric tiers of alliances with similar agencies in nations friendly with the U.S.

The NSA has, for decades, enjoyed a special relationship with the so-called Five Eyes agencies: the U.K.’s Government Communications Headquarters (GCHQ), as well as the comparable agencies in Australia, Canada, and New Zealand. And it’s been established since at least 1988 that those five agencies run a massive network of intelligence-sharing called ECHELON.

Other reports indicate these five agencies have a promise to refrain from spying on each other, even as they freely share information on their own citizens, and that the NSA sometimes refers to these as “2nd party” nations.

Although the Five Eyes agencies are its closest partners, the NSA has relationships with at least three more rounds of eyeballs.

Next in line is the so-called Nine Eyes partnership. That brings Denmark, France, the Netherlands, and Norway into the fold. It’s not clear from the reports what level of access or intelligence sharing separates these two tiers.

Just as the Obama Administration has claimed to have not been fully aware of how much the NSA spied on foreign leaders, it’s unclear exactly how aware these countries’ governments are of this activity. When documents leaked by former NSA contractor Edward Snowden showed that the NSA had multiple programs to spy on French citizens, France’s Interior Minister said the news was “shocking” and called for an immediate explanation. Subsequent revelations show that France has its own system to track citizens’ phone records, and French intelligence agencies pass intelligence on French citizens to the NSA.

After the Nine comes the 14 Eyes, which adds Belgium, Germany, Italy, Spain, and Sweden. Some of the earliest Snowden leaks showed that Germany’s equivalent agency, the BfV, had shared XKeyscore information—fundamental Internet data, in real-time—with the NSA. But according to GCHQ minutes from 2009, the Nine Eyes intentionally excluded the BfV, for unknown reasons. “The Germans were a little grumpy at not being invited to join the Nine Eyes group,” the minutes revealed.

The NSA’s intelligence partnerships don’t end there. The agency has entirely separate categories for classifying its friend groups. For instance, the NSA has partnerships with two “tiers” of nations, believed to be a reference to those nations’ cooperation in sharing their citizens’ phone records with the agency. The first tier includes the Five Eyes nations, but the second doesn’t match up with any of the aforementioned lists, and only a few countries appear on both. It’s also been confirmed that the NSA has passed on information to Israel, which isn’t on any of these lists.

Finally, the Guardian notes that some documents make reference to an even larger “41 Eyes” group, which ties in some of the nations allied in the U.S.’s coalition in Afghanistan.