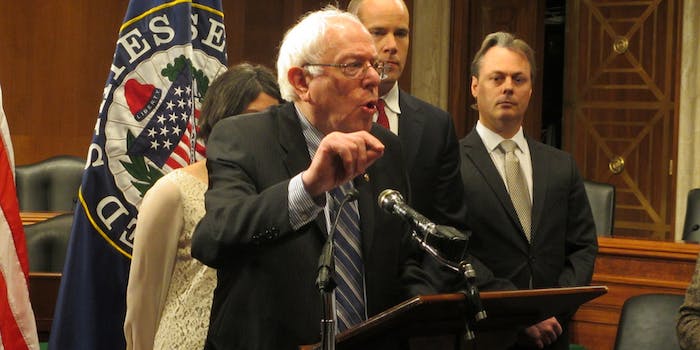 Is the NSA spying on members of Congress?

The agency doesn't deny it.

The U.S. National Security Agency has responded to a senator’s letter asking whether the agency conducts surveillance on members of Congress.

On Jan. 3, Sen. Bernie Sanders (I-Vt.) published a letter demanding to know whether the NSA “has spied, or is … currently spying, on members of Congress or other American elected officials.”

The NSA’s response didn’t directly address the question, instead asserting that elected officials have the same protections against NSA spying that private citizens do:

“NSA’s authorities to collect signals intelligence data include procedures that protect the privacy of US persons. Such protections are built into and cut across the entire process. Members of Congress have the same privacy protections as all US persons. NSA is fully committed to transparency with Congress.”

That might not be much comfort to members of Congress, though. Since NSA contractor Edward Snowden began leaking documents about the agency’s surveillance efforts last June, U.S. spy programs have been criticized for a lack of oversight.

Just last week, the Foreign Intelligence Surveillance Court, the secret court that issues surveillance orders for the NSA, renewed the agency’s ability to spy on U.S. citizens’ phone records for the 36th time in 7 years.

A panel convened by President Barack Obama made several recommendations aimed at curtailing the NSA’s nearly unfettered ability to spy, including suggesting that the agency stop storing Americans’ phone records.

The NSA is currently facing a legislative battle over the USA Freedom Act, a bill that would roll back some its powers and introduce more oversight of domestic surveillance.

H/T The Guardian | Photo of Sanders via public citizen/Flickr