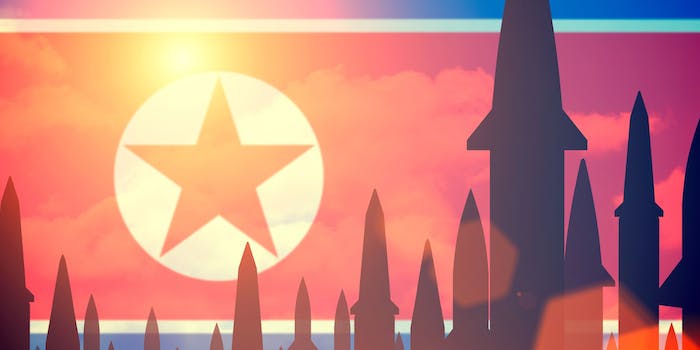 What provoked Trump's tweets on Monday?

President-elect Donald Trump on Monday evening swore that North Korea would be stopped from developing a nuclear weapon capable of hitting American soil.

North Korea just stated that it is in the final stages of developing a nuclear weapon capable of reaching parts of the U.S. It won't happen!

Is that something we really have to worry about right now?

In his New Year’s Day message, North Korean leader Kim Jong-un announced that his nation was close to testing an intercontinental ballistic missile for the first time in its history, according to state-run newspaper Rodung Sinmun. Kim accused the United States of blackmail and vowed to continue expanding Pyongyang’s nuclear capacity unless the United States stops joint military exercises with South Korea.

Global anxiety over North Korea’s desire to become a nuclear power reached a melting point in 2016. Pyongyang conducted two nuclear tests last year, including the biggest one in the nation’s history back in September.

North Korea has long set its sights on developing long-range missiles, which are designed to hit targets located several thousand miles away, to pose a threat to the United States. While pushing back against Kim, Trump also accused China—North Korea’s largest trade partner—of neglecting its responsibilities to dial down Pyongyang’s nuclear ambitions.

China has been taking out massive amounts of money & wealth from the U.S. in totally one-sided trade, but won't help with North Korea. Nice!

So, is North Korea as close to developing a nuclear weapon as Kim claims? Experts are doubtful.

North Korea’s experiments with nuclear weapons have been pretty spotty, and Kim has a long history of overstating the nation’s nuclear capabilities.

“There’s a fair assessment that […North Korea] is technically capable, but it does not mean they have a reliable device or that it is consistent,” Rodger Baker, Stratfor’s vice president for strategic analysis, told the Daily Dot in a phone interview.

According to the Nuclear Threat Initiative, a non-profit that works to prevent attacks with weapons of mass destruction, North Korea has developed the basics of a nuclear program: missiles, short-range rockets, a warhead, and weapon-grade plutonium But experts insist that the country’s faulty, error-prone nuclear arsenal is far from a global threat.

Rand analyst Bruce Bennett pointed out to CNN that seven of North Korea’s eight tests of long-range missiles were failures.

“[North Korea] would need to have developed some form of reliable delivery mechanism for its nuclear weapons that could reach anywhere in the world. And the North has not yet done that,” Bennett said.

North Korea’s claim back in January 2016 that it had successfully test-detonated a hydrogen bomb that could “wipe out the entire U.S. territory” was later dismissed by the international community. Tests revealed that the device had a yield of 6 kilotons, which is roughly 100 times less powerful than a thermonuclear device.

However, the nation’s struggling nuclear program has made significant strides in the past several months. A 5.3 magnitude earthquake detected in North Korea in September was revealed to be caused by its latest nuclear test, a warhead that could yield between 10 and 20 kilotons.

The nation’s launch of the Unha-3 rocket in February 2016 set off alarm bells in the world’s international security community. North Korea has turned a deaf ear to threats by the U.S. and its allies to impose sanctions and cut off food aid.

If North Korea was able to reconfigure its Unha-3 rocket to a missile, it would be able to reach Alaska and possibly Hawaii, according to a blog post by David Wright, co-director of the Global Security Program at the Union of Concerned Scientists.

“North Korea stands out as the only nation to have tested nuclear weapons in this century. Now, I want you to stop for a minute and really think about this. Combining nuclear warheads with ballistic missile technology in the hands of a volatile leader like Kim Jong-un, is a recipe for disaster.”

Harris added that “there’s some debate” about North Korea’s nuclear development, but he said he “take[s] them at their word” and urged the Pacific Command to “consider every possible step to defend the U.S. homeland and our allies ”

What are the odds of the U.S. striking North Korea first?

Despite Trump’s December promise that the U.S. would “strengthen and expand” its nuclear capability, a pre-emptive strike is far from the agenda.

Trump advisor and former U.S. Ambassador to the United Nations John Bolton said in November that there was “absolutely zero” chance of the U.S. taking a pre-emptive strike against North Korea, reported South Korean newspaper Yonkap.

What’s more likely is that Trump may wish to negotiate a peace treaty in the condition of a nuclear freeze, one analyst told Yonkap. North Korea may be more likely to agree to a nuclear freeze than giving up its nuclear arsenal altogether, Baker said.

Still, the strength of any peace treaty is reliant on North Korea’s word.

“It’s likely that North Koreans would agree to something of that to start, but it doesn’t mean that they would 100 percent stick to the rules,” Baker said.