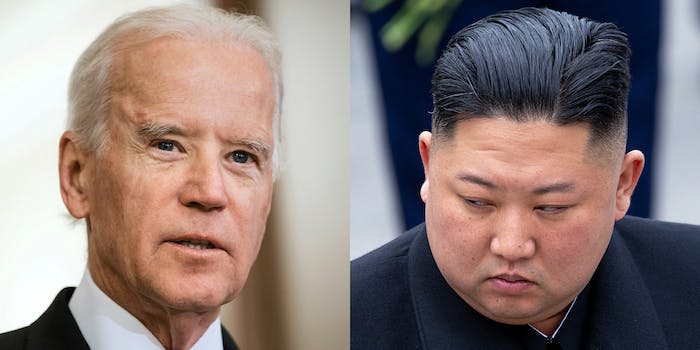 The election of President Donald Trump has made for some extremely strange bedfellows: from resistance libs teaming up with Never Trump conservatives to QAnon truthers and Russiagate believers obsessing over the Mueller report.

Using Trump’s favorite line of attack, North Korea released a statement today calling Biden, who just announced his candidacy, a “fool of low IQ,” according to the Associated Press.

Interestingly, North Korea’s insults of Biden track exactly with how Trump tends to go after the leading contender for the Democratic nomination in 2020. Trump has repeatedly hurled insults at Biden about his intelligence, most recently calling him a low I.Q. individual.

Joe Biden got tongue tied over the weekend when he was unable to properly deliver a very simple line about his decision to run for President. Get used to it, another low I.Q. individual!

Maybe it’s just a coincidence, but while President Donald Trump lobbed threats at North Korea early in his presidency, he’s since become cozy with the rogue nation. He held a summit for Jong-un, where they made vague promises aimed at reconciliation and denuclearization, although it appears nothing has come from that.

“Low IQ,” however, wasn’t the only invective the nation hurled at Biden. It also called him an “imbecile bereft of elementary quality as a human being” and said that him leading the 2020 nomination is enough to make a “cat laugh.”

The comments from Pyongyang come after a speech from Biden where he called the North Korean leader a “tyrant.”