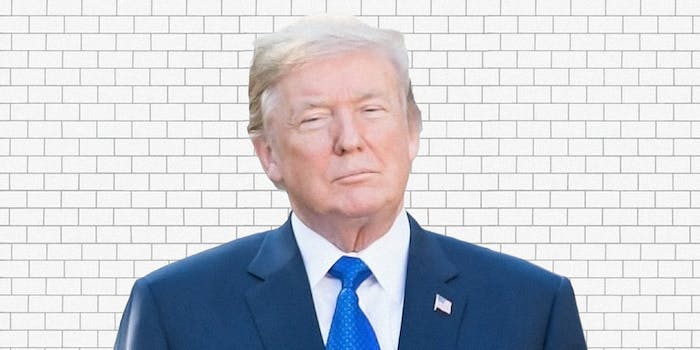 Trump threatens state of California for challenging his authority

It was a victory the president celebrated on Twitter.

Big legal win today. U.S. judge sided with the Trump Administration and rejected the attempt to stop the government from building a great Border Wall on the Southern Border. Now this important project can go forward!

The only problem with Trump’s enthusiasm with the ruling? He has once declared the judge who made the favorable decision unable to fairly rule on cases involving Trump.

When a lawsuit was brought against Trump during the campaign, over Trump University’s fallacious degrees, the then-candidate attacked the judge overseeing the case. Trump said Judge Gonzalo Curiel was treating Trump unfairly because Trump was promising to build a border wall, and Curiel, who was born in Indiana, has parents of Mexican heritage.

“He is a member of a club or society, very strongly pro-Mexican, which is all fine. But I say he’s got bias. I want to build a wall. I’m going to build a wall,” Trump said in an interview on CBS. “[This] judge has treated me very unfairly, he’s treated me in a hostile manner. And there’s something going on.”

The border wall lawsuit brought against the administration said that Trump and the Department of Homeland Security did not have the authority to issue waivers to expedite construction of the wall, but Curiel sided with Trump. The group suing claimed Trump was issuing waivers for more than 30 laws. Curiel said that laws passed by Congress in the ’90s gave Trump the authority to do so.

However, this morning, Trump threatened not to build parts of the wall.

I have decided that sections of the Wall that California wants built NOW will not be built until the whole Wall is approved. Big victory yesterday with ruling from the courts that allows us to proceed. OUR COUNTRY MUST HAVE BORDER SECURITY!

Trump has repeatedly insisted the wall was an urging, pressing national security need, although apparently not enough of one to be above pettily punishing a state that challenged his authority.