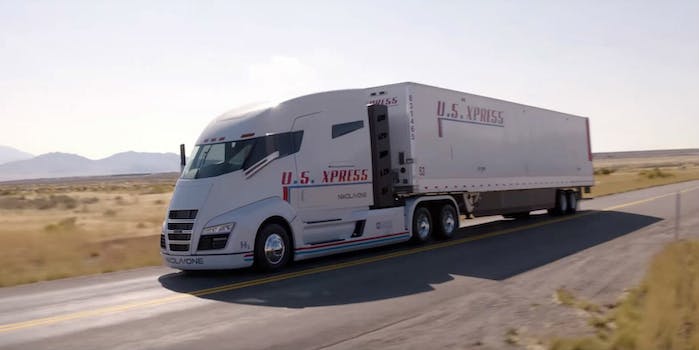 Hydrogen-electric semitruck manufacturer Nikola Motors has filed a patent infringement lawsuit against Tesla for allegedly copying the design of its vehicle.

The Utah-based company is seeking $2 billion in damages allegedly caused by market confusion following the unveiling of the Tesla Semi. The complaint outlines specific design patents for the Nikola One, the company’s latest hydrogen-electric truck, it believes were infringed upon by Elon Musk’s company. It specifically calls out similarities in the trucks’ body, wraparound windshield, and mid-entry door.

“The confusion has diverted sales from Nikola to Tesla,” the filing states. “Further, any problems with the Tesla Semi will be attributed to the Nikola One, causing harm to the Nikola brand.”

There is a certain irony about the allegations of market confusion, considering Nikola named itself after Tesla’s namesake. But Nikola suggested Tesla’s recent battery fires and a fatal accident with autonomous mode engaged could end up hurting its name.

“Should these problems arise with the Tesla Semi, the market will attribute these problems to Nikola because of the similarities between the two vehicles,” the complaint says.

The company also claims a recruiter at Tesla tried to poach Nikola engineers shortly after its hydrogen truck was unveiled. Nikola claims to have formally asked them to delay the Semi unveiling until things got sorted out.

A Tesla spokesperson downplayed the lawsuit in a statement to the Verge, while a Nikola rep refused to comment.

Nikola is currently moving its headquarters from Salt Lake City to Arizona, where it will spend $1 billion on a 1-million-square-foot factory. Its goal is to launch a long-haul hydrogen-electric hybrid truck as early as 2020 with help from German manufacturing giant Bosch. The company so far has more than $8 million in preorders for more than 7,000 trucks.