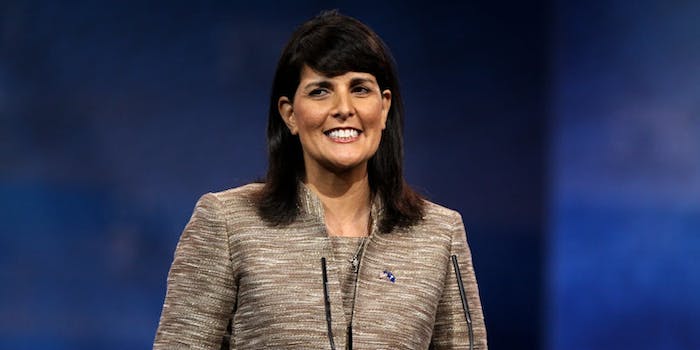 She wants you to know it wasn't her.

For two days, questions have swirled around which senior White House official penned the explosive New York Times op-ed published Wednesday, but United Nations Ambassador Nikki Haley wants you to know that it wasn’t her.

In a not-so-subtle op-ed for the Washington Post on Friday, Haley blasted the “cowardly” official who had claimed to be part of an anti-Trump “resistance” inside the White House.

“I, too, am a senior Trump administration official,” the ambassador wrote. “But I don’t agree with the president on everything. When there is disagreement, there is a right way and a wrong way to address it. I pick up the phone and call him or meet with him in person.”

“As a former governor, I find it absolutely chilling to imagine that a high-ranking member of my team would secretly try to thwart my agenda. That is not the American way,” Haley continued. “It is fundamentally disloyal, not just to the chief executive, but to our country and our values.”

“If the author is frustrated by an inability to persuade the president, then he or she is free to resign,” she said.

Haley goes on to say that the Times op-ed was “dangerous” and “unfairly casts doubt on the president in a way that cannot be directly refuted.”

President Donald Trump has called on the newspaper to expose the anonymous writer and said on Friday that he wants Attorney General Jeff Sessions to investigate the author’s identity.