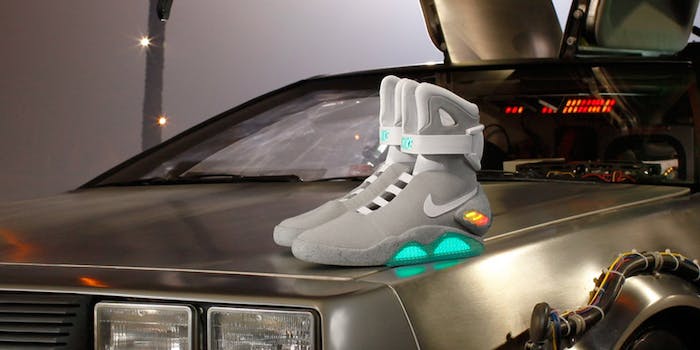 While proceeds are going to charity, fans of Marty McFly's futuristic footwear from "Back to the Future II" wish everyone could afford a pair.

Fans of “Back to the Future II” have waited 21 years to get their hands on the self-lacing kicks Michael J. Fox wore in the time traveling adventure.

Now the wait is over—at least for those with a couple thousand dollars to spare.

Oh, and the self-lacing? Still in the future.

Thursday night Nike revealed the 2011 Nike Mag, also known as, the “Marty McFly” shoe, at a blockbuster event in Los Angeles, according to the Chicago Tribune.

The high-top shoes are almost identical to the ones in the film, except they don’t lace up by themselves. According to a promotional video, fans will have to wait until 2015 for that feature. But it looks like that feature could be a reality: Nike took out a patent on the technology in 2009.

For now, Nike is selling 1,500 pairs of the limited-edition kicks on eBay in various sizes to raise money for the Michael J. Fox Foundation for Parkinson’s research, said Fox on the “The Late Show with David Letterman” Thursday night.

Google founder Sergey Brin and his wife, Anne Wojcicki, will also match all donations made to the foundation up to $50 million through the end of 2012, reported the Tribune.

Noise around the shoes has been building for years and hit a crescendo three days ago after a YouTube video titled “McFly’s Closet” was posted. In the video, which was set to music from “Back to the Future,” are racks and racks of the shoes.

“I don’t﻿ wear sneakers but, this one looks awfully sexy and, I would do anything for a piece of BACK TO THE FUTURE history,” wrote EnchantEmerson on YouTube.

On Reddit, whose users usually swoon over all things “Back to the Future” and DeLorean related, the shoe announcement was met with joy and great disappointment over its price.

“It’s sad that things like this won’t be (financially and quantity-wise) available to so many of the fans,” wrote luckytopher. “Why bother producing something for such specific fans, when it’ll just be an item that gets resold and resold and resold for profits, not enjoyment/love/wearing.”