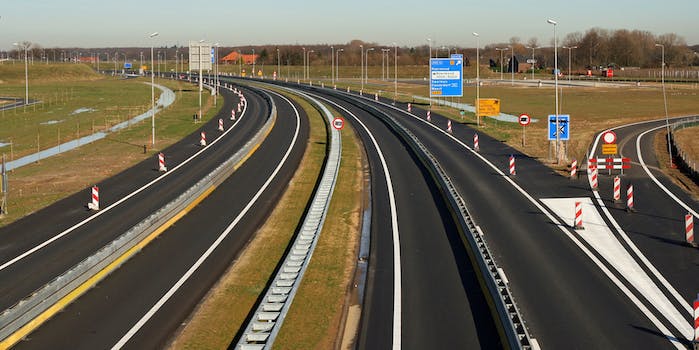 Watch these glow-in-the-dark roads light up the Netherlands

A stretch of highway in the Netherlands looks less like a home to roadkill and boredom and more like a scene ripped from a cyberpunk comic, thanks to a cutting-edge bioluminescent lighting system that makes roads glow brightly in the dark.

For 500 meters, the road lights up at night thanks to a glow-in-the-dark powder mixed in with the road paint. The powder soaks up energy from the sun during the day, and the result is an almost neon-looking lighting system that is both bright and eco-friendly (although it may not be as effective in overcast weather, since the paint derives its glow from sunlight).

Daan Roosegaarde, the designer who came up with the idea, originally wanted to include glowing snowflake-patterned weather markers alongside the traffic markers, to show drivers where to watch for icy patches. Roosegaarde and his design studio haven’t been commissioned to add the snow patterns yet, but you can see what they’d look like in a simulation created in 2012: