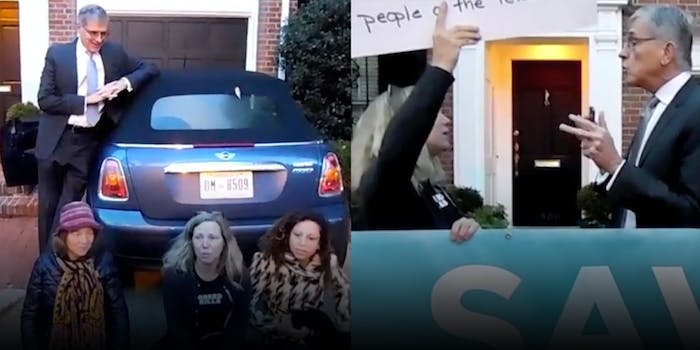 What did they think would happen?

The principle that all data on the Internet must be treated equally by Internet Service Providers, net neutrality has been the topic of contentious debate over the last few months. After a court ruling in early 2014 struck down the FCC’s existing net neutrality guidelines, the subsequent FCC consultation has seen unprecedented engagement from the public—with more than four million people writing to the regulatory organisation, overwhelmingly in favor of net neutrality.

Just hours before Obama was to give a video endorsement of “true net neutrality” Tuesday, protesters descended on the Georgetown home of FCC chief Tom Wheeler, waving banners and chanting “don’t let the Internet die.”

Wheeler remained calm and polite throughout the early morning protest, which was organised by protest group Popular Resistance on the grounds that Wheeler “has made it clear that when he goes to work, he’s not working for the public, he’s working for Comcast, Verizon, and AT&T, the companies that used to pay his salary when he was a lobbyist for the Cable company,” as the group said in a statement.

Popular Resistence now trying to organize a second protest at Wheeler’s home for the evening of Tuesday, Nov. 11—a “Vigil to Save the Internet.”

Following the release of Obama’s video, the FCC has confirmed to the Daily Dot it will delay its decision—originally expected within days—until the new year. Republican senator Ted Cruz, meanwhile, has bizarrely denounced net neutrality as “Obamacare for the Internet.”