You know what Comcast and open Internet groups think about Net Neutrality. But what about regular folks?

A massive downpour couldn’t prevent around 100 net neutrality supporters from congregating on the steps of San Francisco City Hall on Thursday night for Bay Area Speaks, an event organized by the Electronic Frontier Foundation to hear from Bay Area residents and activists about why they support an open Internet.

For an hour, activists held both signs and umbrellas, and shouted their support for an open Internet, one that exists without restrictions or fast lanes imposed by Internet service providers with the power to throttle data.

By 6:40pm, the rainstorm had turned into a drizzle, and supporters filed in through security and up into a room on the third floor of City Hall, shrugging out of coats while a clipboard circulated, asking supporters to write to the Federal Communications Commission about why they should support net neutrality.

President Obama recently announced his support for net neutrality and reclassifying the Internet as a utility under Title II of the Communications Act of 1934. But the debate is still largely happening in Washington D.C., even though creating fast and slow lanes for Internet connectivity would affect everyone across the U.S. That’s why groups including the EFF, Free Press, the Media Action Grassroots Network, and the Media Alliance organized Thursday’s event: to show lawmakers that the Bay Area cares.

Of the four million Americans who communicated their support of net neutrality to the FCC earlier this year, more comments came from the Bay Area than almost anywhere else, said Corynne McSherry, intellectual property director at the EFF. And some of those people spoke out at City Hall Thursday evening, sharing their own personal stories about why net neutrality matters. 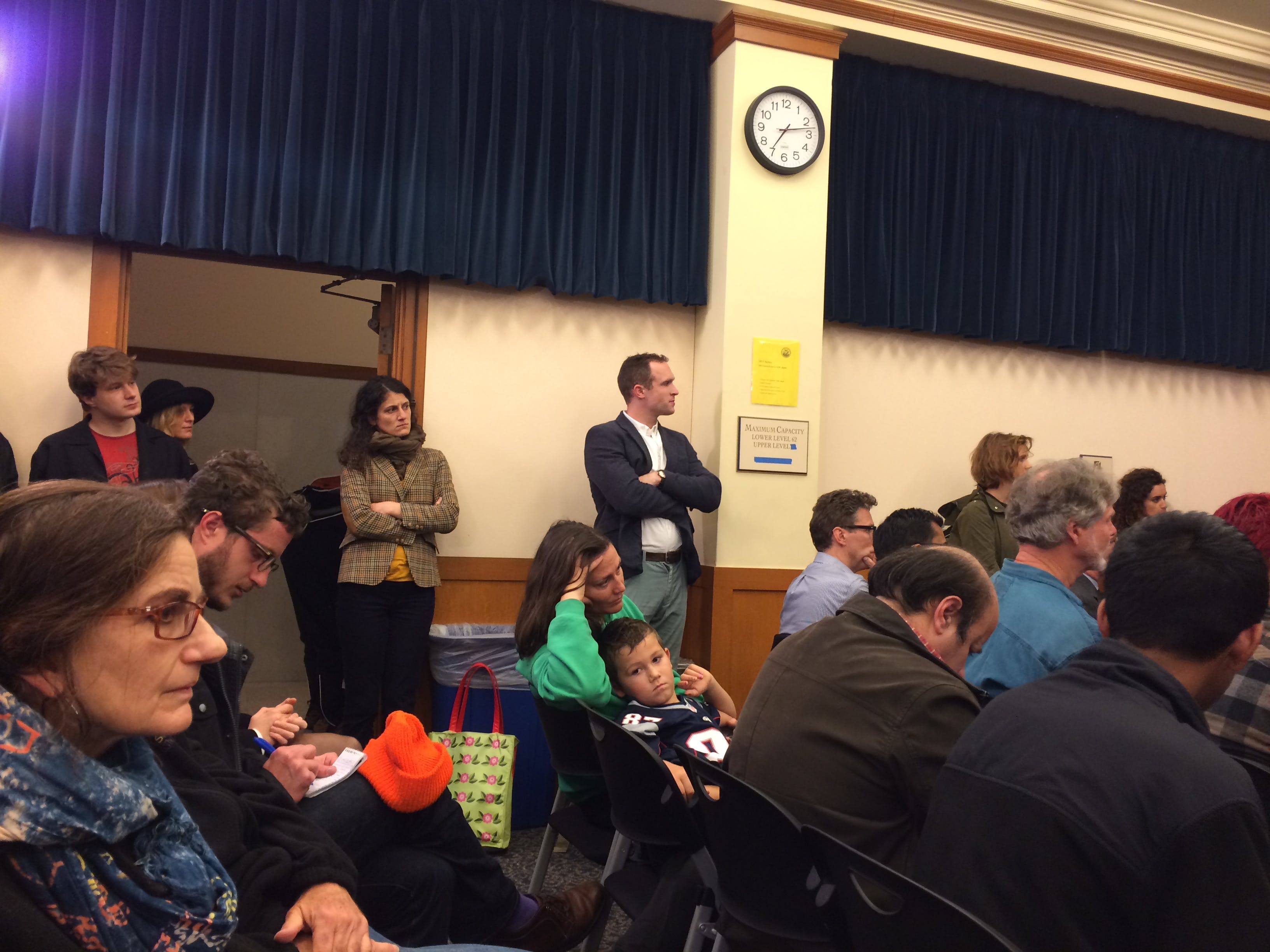 Without net neutrality, independent artists and musicians will fail.

“Now more than ever, no musician can make a living without the Internet,” Thao Nguyen of Thao & The Get Down Stay Down said. The Internet is her lifeblood, she said, and has given her the ability to promote her music and stay in touch with fans.

Nguyen said she grew up in the days of Myspace, and for the last decade she’s relied on the Internet to pursue her dream—it’s enabled her to distribute albums and connect with record labels.

Without net neutrality, artists could be forced to pay for better access to such distribution channels or to be put in the fast lane. If Comcast or another service provider didn’t like what an artist produced, they could theoretically restrict access to those musicians.

Just think: We could live in a world where the only music readily accessible would be produced by people that can afford it.

“Even if you told us the Internet trolls would be forced into a slow lane and unable to comment on music videos, we would still support net neutrality,” she said.

Support net neutrality so our children can have the same access to information as we did.

Naomi Most, an engineer in the Bay Area representing Noisebridge at the rally, said that she wants her son to experience the same Internet she did.

“My generation pioneered the Internet in a very American way, with an eye towards equality, opportunity and a level playing field,” Most said. “Net neutrality makes it easy for me to answer my son’s inconvenient questions like ‘Why do geese fly in a V,’ while we stand in the supermarket line, and not force him to watch Dora the Explorer again.”

Most said her grandmother was one of the ENIAC programmers—the first all-electronic programmable computer was created by female engineers. Net neutrality was something her grandmother would support, she said, and that her children, and children’s children, should all have the same equal opportunity and access to technology.

Net neutrality is needed to save the environment.

“Imagine five years from now, and there’s a small scrappy group of environmental activists who invent an Internet-based tool that allow people around the world to identify new sources of pollution,” said David Pomerantz from Greenpeace. “Except, maybe that doesn’t happen, because they can’t get the same kind of Internet access that Shell and Exxon can.”

Greenpeace, like many other organizations, uses the Internet to share information and organize events—the rally in San Francisco would not have been possible without Internet access.

With restrictions on Internet that widen the gap between the rich and poor, it gives control of information to certain parties. Pomerantz said that if climate change deniers could determine whether or not environmentalists could get the word out about projects or rallies, it could ultimately prevent environmental justice.

Libraries won’t be able to serve their communities.

Libraries aren’t just for people to check out books. In cities across the U.S., libraries provide a free place for students, artists, activists and underserved community members to access the Internet and other resources for free.

Amy Sonnie, outreach director of the Oakland Public Library, said that preventing net neutrality will compound the digital divide. Sonnie said one young student named Wendy is the first in her family to go to college, and she was able to further her education because of the Internet.

“Paid prioritization will hurt cash-strapped libraries and higher education, leading to the loss of other vital services,” Sonnie said. “When 44 percent of libraries have reduced hours nationwide, our online services are more important than ever.”

It will be harder to start small businesses without net neutrality.

Tim Pozar, director of IT and streaming operations at independent film startup Fandor, said that barriers to entry provided by fast lanes will make it harder for startups to exist.

“Larger companies have more resources to address the problem, and startups will be left behind,” Pozar said. “New products and services will cost more, as there will be additional overhead charged by those fast lanes. In some cases new ideas just won’t be funded.”