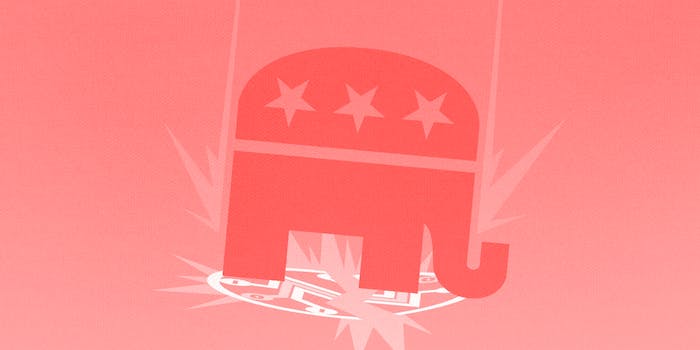 Congress just got one step closer to blocking net neutrality

The House committee that writes the federal budget approved a provision on Wednesday that would freeze the FCC‘s net neutrality rules.

The provision of the spending bill written by the House Appropriations Subcommittee on Financial Services and General Government suspends the rules until a federal court rules on the legal challenge currently facing them. It also requires the FCC to publish the details of any rule it proposes at least 21 days before voting on it—a step that agency advocates oppose because it contravenes the typical rulemaking process—and significantly cuts the commission’s funding.

The full House Appropriations Committee voted 30-20 to approve the bill, which becomes part of the overall spending bill that will eventually go to the House floor. The anti-net-neutrality provision is not present in the Senate appropriations bill.

The White House wrote to the committee to oppose the bill, attacking both the net-neutrality section and the reduction in the FCC’s budget. “These cuts unnecessarily force the FCC to scale back important work on public safety, wireless spectrum, and universal service, while increasing overall costs for taxpayers,” wrote Shaun Donovan, director of the White House’s Office of Management and Budget.

Internet-freedom groups sent a letter to the leaders of the Appropriations Committee on Tuesday railing against the subcommittee’s attack on net neutrality, which they said “would gut the Open Internet Order, leaving the American people and economy vulnerable to blocking, discrimination, and other unreasonable practices of gatekeeper broadband providers.”

“By eliminating the FCC’s ability to protect net neutrality,” the open-Internet groups’ letter read, “this appropriations bill would have a chilling effect on our First Amendment rights and our economy.”

Rep. Jose Serrano (D-N.Y.) introduced a rider to the spending bill that would have reversed the anti-net-neutrality language, but it was defeated. Joshua Stager, policy counsel for New America’s Open Technology Institute, said his group was disappointed at the result.

“As currently drafted, this bill jeopardizes our digital economy by tilting the Internet’s level playing field in favor of entrenched cable and telephone companies,” Stager said in a statement.

“This partisan effort to legislate FCC action through appropriations riders is a sledgehammer to the important work to ensure open access to broadband and communications networks,” Lewis said in a statement. “The Chairman of the Appropriations Committee made it clear that he wants to punish the FCC for its action on net neutrality and now his colleagues are making good on that threat.”