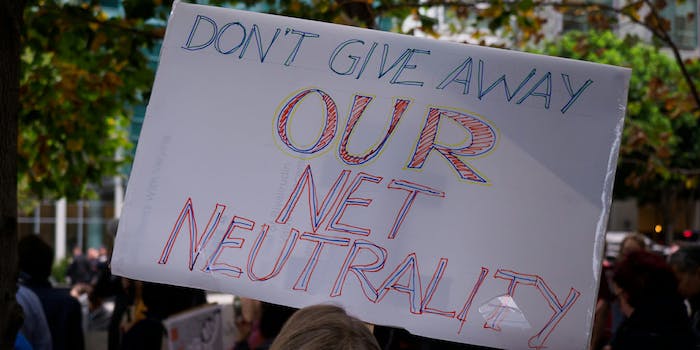 Advocates are planning to speak with lawmakers on June 26.

Next week advocates for net neutrality protections will head to Washington D.C. and visit lawmakers across the country to have face-to-face meetings with representatives and urge them to support a mechanism that could reverse the Federal Communications Commission (FCC) decision to rescind the rules.

The groups behind Battle for the Net, a coalition of internet rights advocacy groups, are planning on harnessing supporters of net neutrality in Washington D.C. and at congressional offices across the country on June 26. The protest comes as the House of Representatives gears up to vote on a Congressional Review Act (CRA) resolution that mirrors one that passed in the Senate last month.

At the Washington D.C. meetings, Battle for the Net representatives say they will give people informational packets before heading into meetings with lawmakers. The goal, they say, is to use the face-to-face meetings as a way to “influence lawmakers’ positions and counter the power of telecom lobbyists.”

“Pundits who say we can’t pass the CRA through the House of Representatives are wrong. They’re the same ones who said we’d never win the 2015 rules, and the same ones who said we’d never win Republican votes in the Senate,” Evan Greer, the deputy director of Fight for the Future, told the Daily Dot. “The internet has changed the rules for what is and isn’t possible in Washington, DC. Our goal on June 26th is to harness the power of the Internet to make it much easier for ordinary people to make their voices heard by their lawmakers.”

The CRA is a congressional tool that allows lawmakers to overturn orders passed by federal agencies and only needs a simple majority to pass.

The House needs 218 votes to pass. As of Monday, 172 lawmakers have voiced support for it, leaving only 46 votes needed to pass it, according to a scoreboard compiled by Battle for the Net.

The in-person meetings are one step in the fight to save net neutrality that advocates promised in the wake of the Senate passing its CRA in May.

Just before the vote, net neutrality activists hand delivered a letter from small businesses to lawmakers that urged them to support the CRA efforts. A similar effort will occur next week, Josh Tabish, of Fight for the Future, said.

Tabish said the group is hoping to find small business owners from “key districts” who can talk to representatives about the importance of net neutrality rules.

“We warned members of Congress that if they hadn’t signed the CRA discharge petition by the time the FCC’s repeal went into effect on June 11th, the internet was coming for them,” Tabish said in an email. “June 26 is one of the first big moments for constituents to pressure lawmakers who have failed to add their name to the CRA to overturn the FCC’s repeal. It will help kick off a summer-long campaign of district-by-district pressure targeting House reps who have yet to sign on to the CRA.”

As of Monday they have scheduled about 50 events across the country to raise awareness about the CRA, according to Tabish.