Revenge is a dish best served at 28.8kbps.

Sometimes, the best way to get back at someone who’s done you wrong is to give them a taste of their own medicine.

Earlier this month, it was revealed that the Federal Communication Commision’s (maybe) soon-to-be-released set of new rules would effectively end net neutrality by allowing Internet service providers (ISPs) to throttle online traffic from Web content providers who don’t pay them a toll.

Not particularly thrilled with the prospect of an Internet where some companies can pay for fast access to consumers and those without sufficiently deep pockets are relegated to second-tier status, Kyle Brand, founder of Web hosting company NeoCities, came up with a brilliant idea: show employees at the FCC exactly what it feels like to have their Internet connections slowed to a crawl.

?Since the FCC seems to have no problem with this idea, I’ve (through correspondence) gotten access to the FCC’s internal IP block, and throttled all connections from the FCC to 28.8kbps modem speeds on the Neocities.org front site,” Brand wrote. ?I’m not removing it until the FCC pays us for the bandwidth they’ve been wasting instead of doing their jobs protecting us from the ‘keep America’s internet slow and expensive forever’ lobby.”

Brand’s plan isn’t just to slow down the FCC’s connection to its sites. He also wants to let them know what it feels like to have to pay for speed. In his blog post, Brand called it the Ferengi Plan: 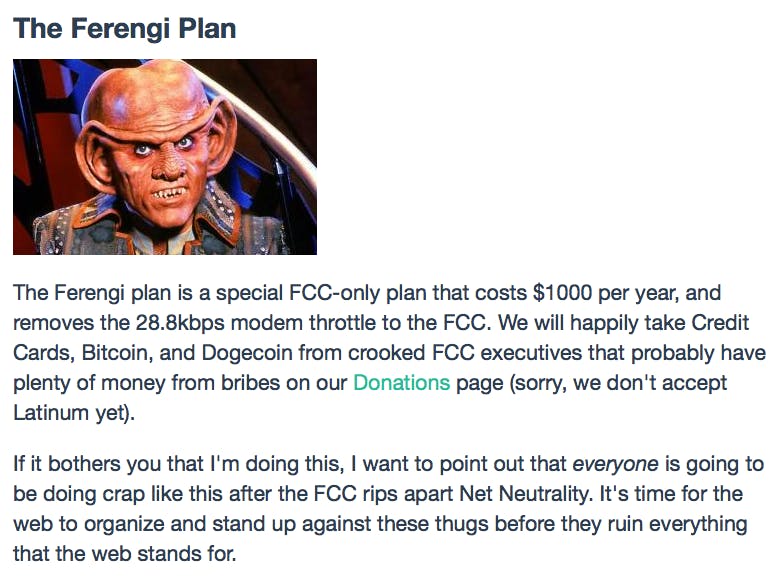 The idea was received enthusiastically on Reddit, a site whose users overwhelmingly favor net neutrality and has a management team that has come out strong against the concept of a ?fast lane.”

In the comment thread of an article about Neocities’ FCC throttling effort, one Redditor posted:

Another user took the idea one step further, advocating that getting one particular type of website on board with the effort, it would have a particularly dramatic effect in turning the tide:

In order to facilitate the spread of this idea, Brand posted the code he used on the open-source code repository Github.