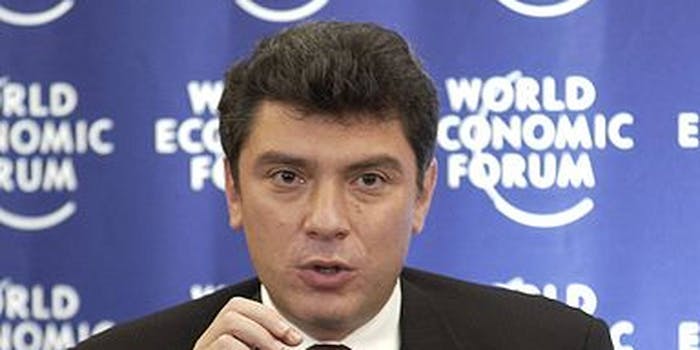 Boris Nemtsov, a prominent anti-Putin and anti-war politician in Russia, was shot in the chest four times and killed in Moscow just days before an opposition march was set to take place in the capital city, according to multiple reports out of Moscow.

Nemtsov died at the scene of the shooting right outside the Kremlin, the seat of Russian government power in the capital. It’s not clear how many shooters were involved but it is clear that none have been arrested by police, Russian media is reporting.

Russia-focused social media is aflame with the news. Nemtsov was a savvy social media user himself, with over 66,000 Twitter followers.

Just weeks before his murder tonight, Nemtsov told an interviewer, "I'm scared that Putin will kill me." http://t.co/hWNVQR3RWH

Nemtsov, who was once considered a possible successor to Russia’s first post-Soviet leader Boris Yeltsin, supported Ukraine in the recent conflicts between Putin’s Russia and its western neighbor. After Malaysia Flight 17 was shot down over Ukraine, Nemtsov offered condolences to the victims and said of the perpetrators, “Those bastards must be destroyed.”

Alexei Anatolievich Navalny, another prominent liberal Russian reformer and march organizer, has been put in jail.

Nemstov, 55, was known as a liberal throughout the political career that began just before the fall of the Soviet Union. In 1989, he ran on a radical pro-democracy platform that was ultimately unsuccessful but began to gain him wide notoriety.

Last year, Nemstov wrote in the Kyiv Post about Russia’s conflict with Ukraine.

Nemtsov’s fierce opposition to Putin stands in stark contrast to a 2001 New York Times opinion piece in which the politician argued that Putin was Russia’s best way forward. He had long since distanced himself from that opinion by the time he was killed on Friday.

Nemstov has been a loud critic of Putin’s handling of Russia’s current financial crisis. In 2011, he predicted the eventual end of Putin’s reign: “What lies ahead for him is sheer nightmare and disaster. And he deserves to go down.”

Photo via Keverich/Wikipedia (CC BY SA 3.0)