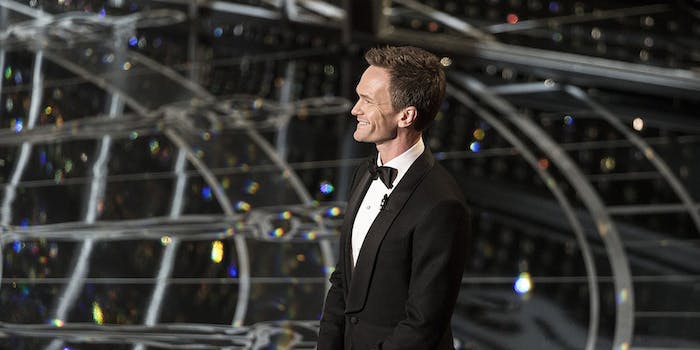 A joke by Oscars host Neil Patrick Harris made at the expense of U.S. whistleblower Edward Snowden on Sunday evening probably didn’t get the response he thought it would.

Surprising few, the elusive filmmaker Laura Poitras received an Academy Award for Best Documentary Feature for her film Citizenfour, which follows her journey with journalist Glenn Greenwald to greet and debrief Snowden in Hong Kong. She was joined on stage by Greenwald, Citizenfour producer Dirk Wilutzky and editor Mathilde Bonnefoy, and much to everyone’s surprise, Lindsay Mills, Snowden’s girlfriend who now lives with him in Moscow.

“The disclosures that Ed Snowden revealed don’t only expose a threat to privacy but to our democracy itself,” Poitras said upon receiving her Oscar. “When the most important decisions … [that] affected all of us are made in secret, we lose our ability to check the powers that control,” she said.

As Poitras and her colleagues departed the stage, Harris, a.k.a. “NPH” made his quip:

“The subject of Citizenfour, Edward Snowden, could not be here tonight for some treason.”

Snowden is charged with three felonies, including espionage, but is not charged with treason. Either way, Snowden supporters on Twitter did not find his joke funny.

Is it me or was NPH's zinger about Snowden's 'treason' in bad taste given they just gave citizenfour an #Oscar?

Profoundly disappointed in the “for some treason” joke from NPH.

Edward Snowden is a patriot, who stood up for all Americans.

NPH does a treason pun seconds after Citizen4 wins. Weak bid for a laugh that didn't come. Time for an intervention. #Oscars2015

NPH you're dead to me for some treason

A few people, however, found the value in NPH’s pun, even while still supporting Snowden as a whistleblower:

The #NPH treason dig was funny, even if #Snowden and @ggreenwald are American heroes. #Oscars #Oscar2015 #Citizenfour

Kudos to whistleblowers AND NPH for his pun "treason!" #Oscars2015

I laughed at the “treason” joke. Snowden’s no traitor, but that was funny. And NPH also made fun of Meryl Streep. Nothing off limits.

Snowden’s leaked documents have caused a wave of controversy for more than a year and a half, sparking widespread debate over the National Security Agency’s (NSA) mass surveillance capabilities. Snowden currently resides in Russia, and many fear that returning to the United States may mean a secret trial and life behind bars for the 31-year-old.

Poitras was previously nominated for her 2006 film My Country, My Country which examines the nation of Iraq under U.S. military occupation. Citizenfour will air on HBO on Monday, Feb. 23, at 9pm.

Update: This article has been updated to provide additional clarity and context.