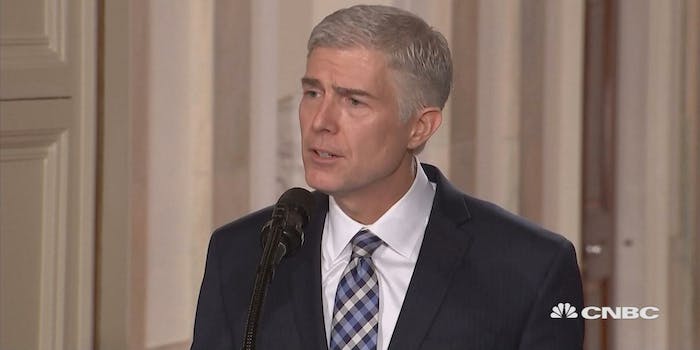 Neil Gorsuch passes Senate hurdle, but Democrats have the votes to filibuster

Get ready for Republican senators to invoke the 'nuclear option.'

The Senate Judiciary Committee on Monday voted along party lines to approve President Donald Trump‘s Supreme Court nominee, Neil Gorsuch, setting the stage for a fight over not just the makeup of America’s top judicial body but for the future of the Senate itself.

All 11 Republicans on the judiciary committee voted in favor of Gorsuch, while the committee’s nine Democrats voted against him. The highly partisan vote precludes a battle before the full Senate, where Democrats have gathered the requisite 41 lawmakers needed to filibuster Gorsuch’s confirmation process.

With a filibuster looming, Republicans warn that they could trigger the so-called nuclear option—the elimination of the filibuster for Supreme Court nominees.

Sixty votes are needed to end Senate debate over Supreme Court nominees, which would move the issue to a full vote. Republicans could change that rule to allow a simple majority of 51 senators to end debate. Democrats previously eliminated the 60-vote threshold for lower-court nominees during the Obama administration but left the possibility of a filibuster against a Supreme Court nominee intact.

Critics of the nuclear option on both sides of the aisle warn that eliminating the filibuster for Supreme Court nominees is a drastic move that will fundamentally change the nature of the Senate, reduce the need for presidents to nominate moderate candidates to the lifelong Supreme Court seat, and increase partisanship by allowing whichever party controls the Senate to plow its agenda through against a neutered minority opposition.

The full Senate is expected to take up Gorsuch’s confirmation by the end of this week.