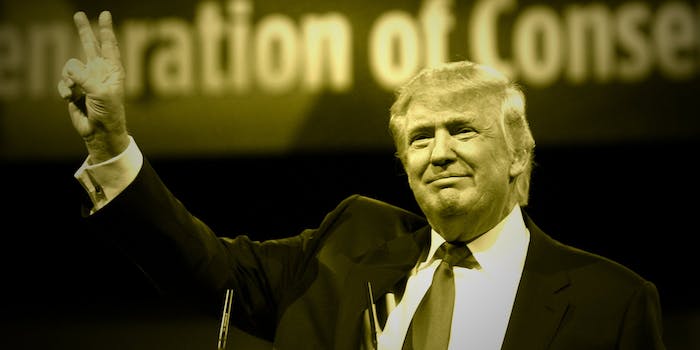 Get out your pitchforks.

A spokesman for Cumberland County Sheriff’s Office initially told the Daily Beast that the department had “would have brought charges by now” had it intended to do so. However, a CCSO statement released later on Monday said the police inquiry remains ongoing.

“Our investigation is not complete as the incidents of Wednesday, March 10, 2016,” the CCSO statement said. “We are continuing to look at the totality of these circumstances, including any additional charges against Mr. McGraw, including the potential of whether there was conduct on the part of Mr. Trump or the Trump campaign which rose to the level of inciting a riot, and including the actions or inactions of our deputies.”

The Fayetteville, North Carolina, rally was punctuated by a Trump supporter sucker-punching a protester in the head and then threatening to kill him. The supporter, 78-year-old John McGraw, was arrested and is now out on bail. He faces charges of assault and disorderly conduct. Trump is considering paying the man’s legal fees.

“The man got carried away,” Trump said on Sunday. “He obviously loves his country, and maybe he doesn’t like seeing what’s happening to the country.”

Violence has been an increasingly regular event at Trump events around the country. Early on Monday, Trump denied that any violence at all has taken place on the campaign trail.

Hermann Walz, a former prosecutor and practicing attorney in New York as well as an adjunct professor at John Jay College of Criminal Justice, said last week that Trump will likely not be charged with inciting a riot.

“Short of Donald Trump saying something like, ‘Get that guy and punch him in the face,’ or something like that, I don’t see that he would have any real liability,” Walz told the Washington Post. “Otherwise, he would have to create the atmosphere and give the intention, without actually saying it, that it’s okay to beat these people up here in front of me.”

The 2016 Republican primary election carries on Tuesday night, when Trump faces his rivals in primaries in Florida, Illinois, Missouri, Ohio, and North Carolina, where the charges are being considered.

Update 5:47am CT, March 15: Donald Trump will not face charges of inciting a riot in North Carolina.