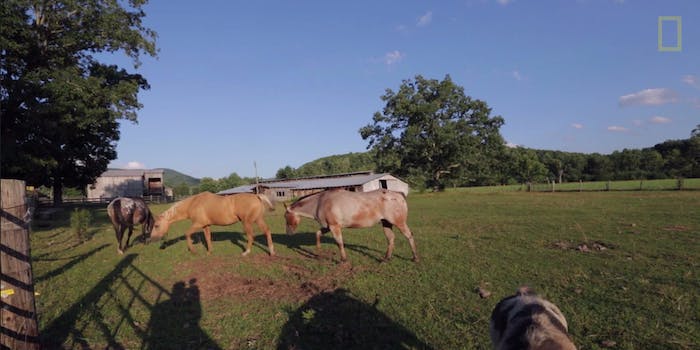 Take a trip to the least plugged-in county in the U.S.

In Pocohontas County, there is no Internet—or much of anything else.

In Pocahontas County, W. Va., the residents are hardcore about living the rural life. They’re so hardcore that they routinely go without some of modern life’s most basic amenities, including cell phones, digital cameras, and wireless Internet, reports National Geographic.

The county is home to a branch of the National Radio Astronomy Observatory (NRAO), a government-funded science project which uses special telescopes to detect and study naturally occurring radio frequencies throughout the universe. The NRAO needs the radio-wave equivalent of absolute silence to do its job well, which means most of its telescopes are located in rural valleys away from populations with lots of radio interference.

Here in the unincorporated town of Green Bank, W. Va. (population 143), is the NRAO’s largest telescope. The world’s largest fully steerable radio telescope, it resides in a 13,000-square mile stretch of land known as the National Radio Quiet Zone. In the National Radio Quiet Zone, no devices that transmit radio waves are allowed, including cordless phones and Wi-Fi. It’s kind of like The Village without the cult terrorism. Life in the village of Green Bank is so peaceful that some three dozen people who suffer from a psychological condition known as electromagnetic hypersensitivity have moved there to escape cellular radiation.

So what does a tiny town full of scientists and hypochondriacs and no Internet look like? Like an idyllic place that would bore us to tears, at least if National Geographic‘s journey into the heart of the Radio Quiet Zone is any indication.

Witness the bizarre yet serene excursion below, where we learn that most people in the Quiet Zone have grown up without cellphones and Wi-Fi, and therefore don’t mind what they’re missing. Which just goes to show that one person’s paradise is another person’s hell—but at least we can text an Uber and get out.