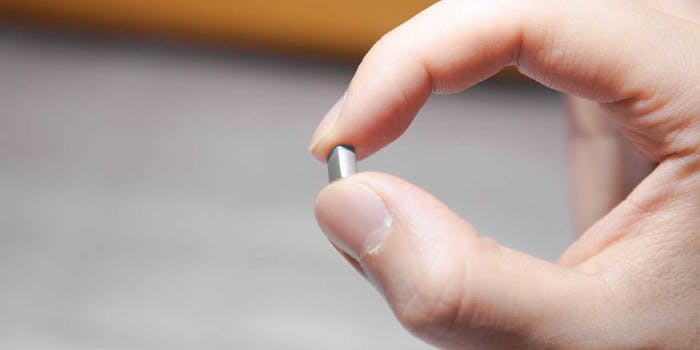 “I wanted to find a way to make them totally invisible."

For the 30 million people in the United States over the age of 12 with hearing loss in both ears, nanotechnology has a solution.

Based in Germany, Nanoplug has developed what it claims is the world’s smallest hearing aid and is taking the crowdfunding route to bring the product to market. Among its differentiators, Nanoplug fits entirely within the ear canal making it invisible to others. The company believes by eliminating the social stigma of wearing a visible, somewhat larger hearing aid, it will be able to reach what it calls “a younger, hipper market.”

The Indiegogo campaign to raise $80,000 began in late October, but has only raised $8,915 as of Nov. 11. The crowdfunding effort ends at midnight, Dec 8.  The campaign is a flexible funding program, meaning Nanoplug does not have to raise the entire amount to keep the donated funds.

Nanoplug represents the efforts of Nevena Zivic, its founder, who suffers from hearing loss. “As a hearing aid wearer I was always disappointed by how other people look at hearing aids and how frustrating it is, and such a harmless device never became cool as the glasses,” Zivic told the Daily Dot. “I wanted to find a way to make them totally invisible, new nano batteries made it reality.”

The device, which Zivic hopes to sell online as well as in retail outlets, will likely sell for $400. For Indiegogo contributors who donate $399, there is a special offer of $300 off list price for a pair of Nanoplugs when they are available. The company founder will look to other sources for money to begin mass production.

Like others who’ve used crowdfunding, Zivic realizes that not only is it an opportunity to raise capital, it also becomes a way to build awareness and take on the high cost of current solutions. “One of my goals was the demystification of hearing aid industry,” she added. “In the 21st century, prices of $2,000 or more per one aid and three pieces inside are really unacceptable.”

For anyone who has had a small object accidentally lodged in their ear, the size and positioning of the device deep inside the ear canal might be a cause for concern. The device must be removed weekly for recharging. Zivic believes it’s the Nanoplug’s micro-sized form factor that will be a key to its success and that the weekly recharging process is a breeze.

“The removal tool is very easy to use,” Nanoplug’s founder said. “This aid is a dream come true for all the people who suffer from hearing loss, something they probably always wished for, as I did.”

Update 12:16pm CT, Nov. 20: An update to the Nanoplug effort to raise $80,000 via Indiegogo for its new invisible hearing aid. The company reports it’s over $35,000 at this point and have extended its fundraising efforts to Dec. 28.