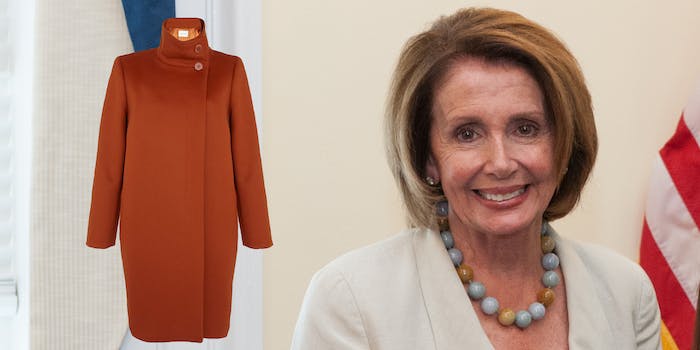 Nancy Pelosi’s coat is the meme the resistance needed

Democratic House Leader Nancy Pelosi’s cool exit from the White House after her fiery televised put-down of President Donald Trump really caught the nation’s attention. In the days since, her orange coat has become the symbol of rebel sass.

The president’s meeting with Pelosi and Sen. Chuck Schumer quickly disintegrated into a spat over funding for Trump’s Southern border wall, which looks set to provoke a government shutdown later in the month.

Pelosi had Trump own that, provoking the president by branding the potential situation a “Trump shutdown.” When Trump tried to bite back, Pelosi demanded his respect and reminded him of her party’s victory in the House last election.

The startling exchange stuck the public for several reasons, least of all that someone had the guts to challenge the smack-talking president.

“It’s like a manhood thing for him,” she continued at a meeting with House Democrats afterward, according to reports. “As if manhood could ever be associated with him.”

As photographs surfaced of Pelosi leaving the White House, however, her striking orange swing coat and sunglasses became the meme of the moment.

Me leaving your Holiday Party after starting major drama pic.twitter.com/BRf98b9R2g

Some pointed out that the coat was the same worn by the Democrat at President Obama’s inauguration in 2013 and praised the extra shot this represented.

The most important thing to come out of today's news was that Nancy Pelosi plus a dark orange coat and cool shades equal pure badassery.

Bonus: she may have been throwing subtle shade since she wore the same coat to Obama's Jan 2013 inauguration. #TeamPelosi #TrumpShutdown pic.twitter.com/Myb37pzwmH

Now, it seems, lots of people really wanted to know where they can get that coat.

@NancyPelosi —you were amazing in that meeting. But I, and many other folk, have a serious question: Where can we buy that red coat?#fabulous #RedCoat #WANT

downloading kim k’s screenshop app but only because i need to have…nancy pelosi’s coat??? pic.twitter.com/4cc1Q54ly3

As the New York Times reports, the Glamis coat was part of designer MaxMara’s 2013 collection and is no longer available to purchase.

Disappointment didn’t last, however. On Wednesday, the company’s creative director Ian Griffiths announced that he plans to ride that meme right to the bank and that the Pelosi coat will return in 2019, available in a range of colors.