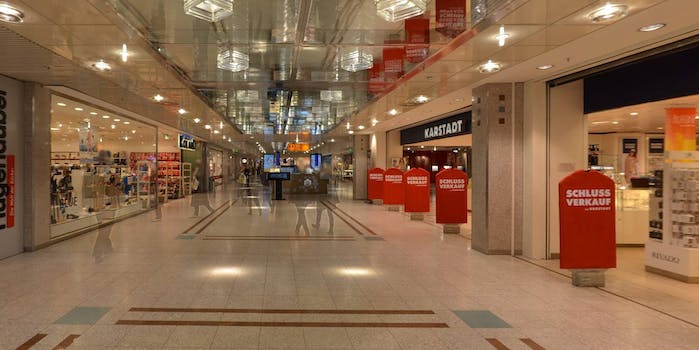 A shooting at the Olympia shopping center claimed the lives of at least 10 victims in Munich. The incident occurred at around 5:52pm local time Friday night at the McDonald’s located inside the mall.

Authorities were initially seeking up to three gunmen, who managed to kill at least 10 people and injure 21 more. It now seems as if this is the act of a lone gunman. During a press conference, officials announced that the suspect had shot himself and was discovered by police at around 8:30pm.

It’s unclear what motivated the gunman, who was described as an 18-year-old of Iranian descent reportedly living in Germany.

A video depicting the sound of gunfire and running bystanders has been making the rounds on Twitter, as have photos of victims and more violent imagery. Police have cautioned against the sharing of such depictions, however.

Utilizing the city’s smartphone initiative to contact citizens regarding dangerous events, authorities were able to issue an emergency warning telling those around the Moosach district to stay indoors and turn on the radio and TV. The warning additionally stated that transit had been suspended as law enforcement continues its search for suspects.

Following the incident, the hashtag #offentür, which loosely translates to “open door,” began trending. Its purpose is similar to the “open door” hashtag initiative seen in Nice following the Bastille Day attack, which gave those within the vicinity a safe place to stay.

The U.S. consulate has responded by telling those visiting the area to shelter in place:

US citizens in #Munich advised to shelter in place. Media reports of shots fired at Olympia shopping mall: pic.twitter.com/DWRw6CGa7q

As the search for the suspects in this tragic shooting continues to unfold, the people of Germany are already receiving support. According to the Guardian, President Obama released a statement voicing his solidarity with those in Munich. “We don’t yet know exactly what’s happening there, but obviously our hearts go out to those who may have been injured,” Obama stated. “We are going to pledge all the support they may need.”

Update 3:15pm CT, July 22: Facebook has reportedly initiated its “safety check” feature for those in the region.

Update 3:33pm CT, July 22: Authorities state that the Olympia shopping center has been vacated and a crisis response unit has been deployed. Transit centers are cleared and on lockdown and officials are attempting to clear roadways. Hospitals in the area are currently in “catastrophe mode.”

Police are seeking three suspects armed with rifles, one of whom was captured on video brandishing his weapon at a nearby parking garage.

Update 6:32pm CT, July 22: According to authorities, one of the suspects may have been killed. It’s unclear if the gunman’s death was self-inflicted, though police did tweet that they’d discovered a the body of someone who’d killed themselves.

Update 7:41pm CT, July 22: The mass shooting appears to be the act of a lone suspect, whose body was discovered later Friday evening. Authorities have yet to determine the suspect’s motives and state that the investigation is still ongoing.

Update 9:17pm CT, July 22: At least 21 individuals are injured and 16 remain in the hospital. German Chancellor Angela Merkel has been briefed on the situation and is set to convene a security council meeting about the attack Saturday. Meanwhile, flags across the nation are being flown at half mast in honor of the victims.

This story is still developing.