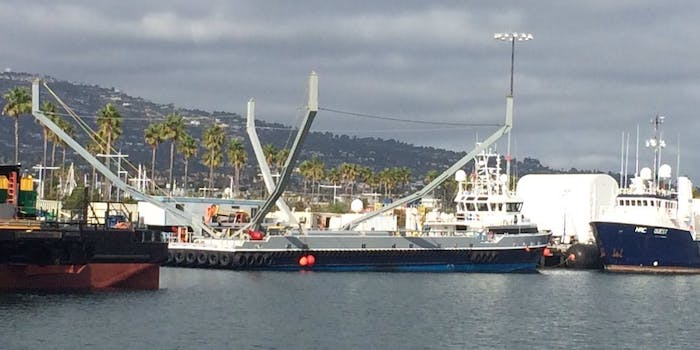 Following this week’s PAZ mission launch, SpaceX brought in a curious vessel to attempt to collect one of the discarded Falcon 9 components. A net boat christened Mr. Steven situated itself near the Vandenberg Air Force Base to recover the Falcon 9’s rocket fairing.

“We’ve got a special boat to catch the fairing… it’s like a giant catcher’s mitt in boat form,” SpaceX CEO Elon Musk told reporters of the ship following the launch of Falcon Heavy earlier this month. While SpaceX already reuses other rocket components, such as boosters, from mission to mission, it hasn’t yet tried to recapture the fairing—until now.

What is Mr. Steven‘s job in this launch?

The fairing is the cone-shaped nose piece that covers a rocket’s payload. It’s normally jettisoned into the ocean after launch, once a rocket has successfully made it out of the atmosphere and into space. For SpaceX’s Falcon 9 rockets, it’s a $6 million piece of equipment. Recovering the fairing, un-damaged, could help shave costs of future missions. (And considering the PAZ mission alone cost $63 million, those savings could add up.) SpaceX will be using parachutes to slow the speed of the fairings as they descend to Earth.

But who is Mr. Steven, and how did this boat come to SpaceX’s aid?

According to MarineTraffic.org, Mr. Steven is a high-speed passenger ship built in 2015. Designated as an offshore supply vessel, it calls New Iberia, Louisiana, home. Outfitted as it is, Mr. Steven has been dubbed a “netted-claw boat.”

Its name, at least according to Musk, is “just random“—the boat is also owned by a Mr. Steven, LLC, but is operated by Sea Tran Marine. At the New Iberia port, the naming scheme is pretty common: Other boats in the port include a Mr. Ridge, Mr. Mason, Miss Christine II, Mr. Evan, and Ms. Grace.

The net strapped between the boat’s claws is quite robust—large and strong enough to theoretically comfortably capture a fairing that’s 43 feet tall and 17 feet wide and weighs upwards of 2,200 pounds. The vessel itself measures 205 feet long by 34 feet wide.

Before settling on this claw-net scheme, SpaceX toyed with other ideas. These included a bouncy-castle-style landing pad and using helicopters to intercept the fairings as they descend to Earth on their parachutes.

In the end, Mr. Steven‘s fairing-catching efforts did not prove successful.

Missed by a few hundred meters, but fairing landed intact in water. Should be able catch it with slightly bigger chutes to slow down descent.

However, SpaceX will get another shot for Mr. Steven to succeed next month.