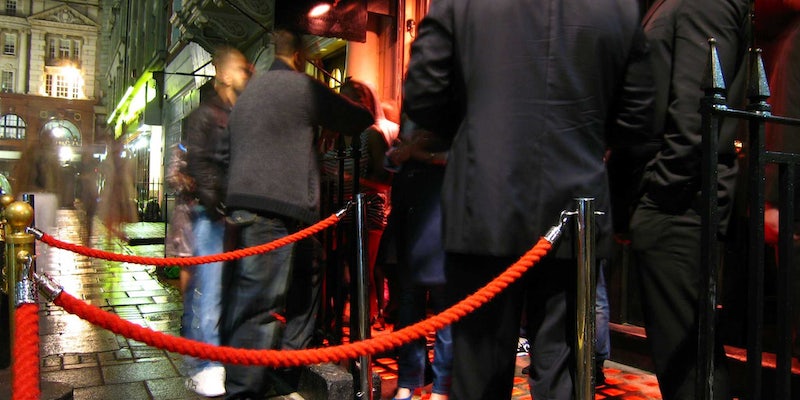 The Lilywhite Collection/Flickr (CC BY ND 2.0)

But is it worth the wait?

The Internet is all about on demand: listen to your favorite songs without waiting for them to come on the radio, stream an entire season of a show with no commercial breaks and immediately resolved cliffhangers, have your every question answered in seconds. No one on the Internet has had to wait for anything since the days of dialup.

What Justin Foley has created is the exact opposite experience than the rest of the modern Web.

Welcome to the Most Exclusive Website. Want to check it out? Get in line. The site only allows one user in at a time. Once they’re beyond the velvet rope, they have only 60 seconds of exclusivity to enjoy their status as a member of the elite before being pushed back out the door.

“I was trying to think of an idea that would leverage the reactivity of Meteor and be fun at the same time,” he told the Daily Dot. “The Internet is kind of designed to be open and accessible, and when you put a site up, you want as many people as possible to connect to it. So, what if I did something that was the antithesis of that?”

The site, which as been up and running quietly since March 2015, existed quietly until blowing up on Reddit’s r/InternetIsBeautiful subreddit after having the distinct honor of being ranked number one on a list of “10 Completely Useless Websites” by blog Johnny Lists. Since the discovery, Foley said Reddit has been “exploding the life out of the server.”

It’s actually not the first time the site has been put in front of the rabid Reddit audience; Foley posted it on r/Funny shortly after making it, but it didn’t get quite the traction it has now. “Well worth the minute wait,” one redditor commented at the time.

The wait is just a bit longer now.

According to the site’s stats, over 7,000 hours have been spent waiting in line at the time of publication, with the average user waiting for nearly 20 minutes. Foley said the longest wait he’s heard so far was six hours. The length the line has reached is beyond what Foley ever imagined. “I was amazed that people were waiting 10 minutes,” he said. “I’m not sure anything on the Internet is worth six hours of waiting.”

What exactly are they waiting for? Though there are spoilers posted elsewhere on the web, the mystery is best solved by actually experiencing it. Just be warned that the end result might not be what have the pay off you’re expecting. Foley said he’s received messages of people complaining the site was a waste of their time. “I did get a lot of very hateful messages about how much time people wasted…That’s kind of their own fault,” he said. “What did they expect?”

People who have gotten through the line have used their opportunity to share a message for a variety of purposes. Some have left YouTube videos to music for people to listen to while they way, adding to the night club vibe, like you can hear the music muffled from within the building as you stand outside. Mostly, though, there are messages proclaiming the ultimate achievement of waiting for a little bit for a thing.

Others have completely missed the boat. Foley said “there have been so many people that have just been dropping off and not commenting” after grabbing a ticket because of the long wait.

One of the next features he intends to add is an automated message that will leave a note that a person reached the front of the line but didn’t leave a comment. He’s also said there’s been requests for a notification when the wait is up, so future versions of the site may give a cue on the tab to tell users when it’s their turn to get in.

It’s hard not to draw similarities to the Most Exclusive Website and the Reddit-based sensation the Button. Though it’s now been shuttered, it was a mysterious presence that kept Redditors enamored. Entire communities began to form around peoples’ button-pressing status, turning the simple decision to click into a game or even a determinant for social classes.

Foley’s creation has exclusivity built right into it (and he was quick to point out his site actually existed before the Button), but since everyone has a chance to get in and it’s simple an “in or out” proposition as opposed to a decision that can reflect values, it seems unlikely that the web would rally around the Internet’s own hottest night club in the same way. Then again, Twitch Plays Pokemon watchers built a religion around characters they had no control over, so who knows what people on the Internet are capable of.

While the Most Exclusive Website only allows one person in at a time, its existence is now considerably less exclusive than it once was. Want for admission is rampant, and the entire framework for the project—along with his other endeavors—is open source and available on GitHub. Foley said other users could copy the project and create their own offshoots.

If you want to experience it for yourself, take a ticket, find a comfortable chair, and get ready to wait. You’re going to be here for awhile.

Photo via The Lilywhite Collection/Flickr (CC BY ND 2.0)