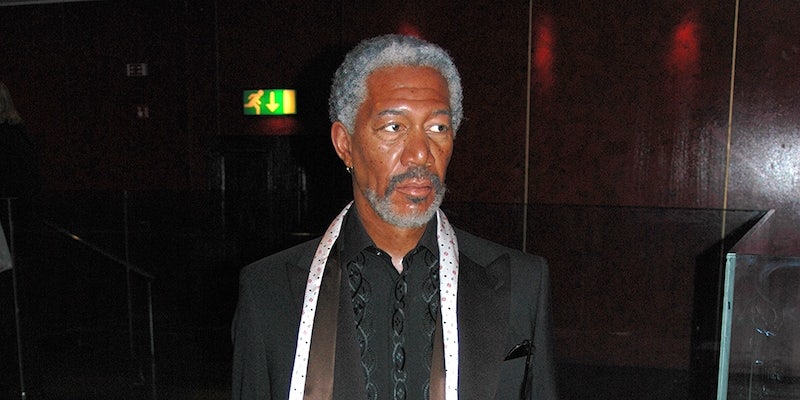 Who are we to argue with the voice of the Almighty?

The voice of the Almighty has spoken.

“They used to say, ‘You smoke that stuff, boy, you get hooked!’” Oscar-winning actor Morgan Freeman said about marijuana in a recent interview with the Daily Beast.

Easily one of America’s most distinguished actors, Freeman, who’s beloved for his soothing voice, called for marijuana legalization “across the board,” adding it’s the only thing that offers any relief from the fibromyalgia pain in his arm.

“My first wife got me into it many years ago. How do I take it? However it comes! I’ll eat it, drink it, smoke it, snort it! This movement is really a long time coming, and it’s getting legs—longer legs. Now, the thrust is understanding that alcohol has no real medicinal use. Maybe if you have one drink it’ll quiet you down, but two or three and you’re fucked.”

The countless believed medicinal benefits of marijuana aren’t the only reason to legalize it, Freeman said, comparing the largely peaceful Woodstock festival of 1969 with the 1999 festival, remembered for numerous incidents of rape and violence.

“Look at Woodstock 1969,” said Freeman. “They said, ‘We’re not going to bother them or say anything about smoking marijuana,’ and not one problem or fight. Then look at what happened in ’99.”

Freeman also spoke about his role opposite Diane Keaton in the 2015 romantic comedy 5 Flights Up, directed by Richard Loncraine.

“I don’t it’s taboo,” Freeman told the Daily Beast, referring to interracial couples. “Cinema is following the real world as closely as they can, and sometimes they’re out front. I don’t think it’s taboo, I just think nobody writes it. This wasn’t written as an interracial couple in the script at all, but that isn’t necessary. The point of open casting is to get the best people for the parts.”