All the makeup inspiration from your Pinterest board, straight onto your face.

Augmented reality continues to make trying out new makeup a fun, easy, and hassle-free experience—this time thanks to an app that lets you scan pictures and faces whose made-up looks you’d like to try on yourself.

ModiFace Live is the mobile app counterpart to the ModiFace makeup simulation mirror, a tool that’s been used by professional makeup artists and in Sephora shops around the world. Both the mirror and the app scans your face and lets you preview thousands of makeup effects. The only difference is that the app gives you the choice of what look to try on virtually instead of overwhelming you with thousands of possibilities.

The app’s Live Scan technology—which was developed for nearly a decade, analyzing over 100,000 photos of made-up faces—takes a 3D live recording of any photo or video so it can detect the present makeup colors and styles. It then converts its compilation of images into a look that can immediately be tried on the user’s face, also through live video.

“Our goal with Live Scan was to create the ultimate search engine for makeup exploration, and to do so in a way that was a seamless experience for users.  Live Scan constantly scans live video and as soon as there is a face, it is immediately translated into a look that can be tried on.  It is easy, quick, and magical,” said Parham Aarabi, Founder and CEO of ModiFace.

Firing up the app will instantly trigger your device’s front-facing camera. Tap on the Live Scan icon (rainbow-colored, donut-shaped icon) to scan your makeup reference. A thing to note: The first time you use it, you will be forced to do a scan; subsequent times, you can click on the white dot above the icon to rescan. 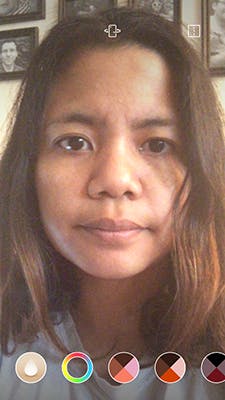 For optimal results, make sure the look you are scanning is oriented correctly so it can detect the makeup details more accurately. Scanning a photo, video, or someone else’s actual face will transfer detected makeup effects onto the app’s face chart. Simply tap on it to try on the rendered look. Drag the icon up or down to control the intensity of the effect. 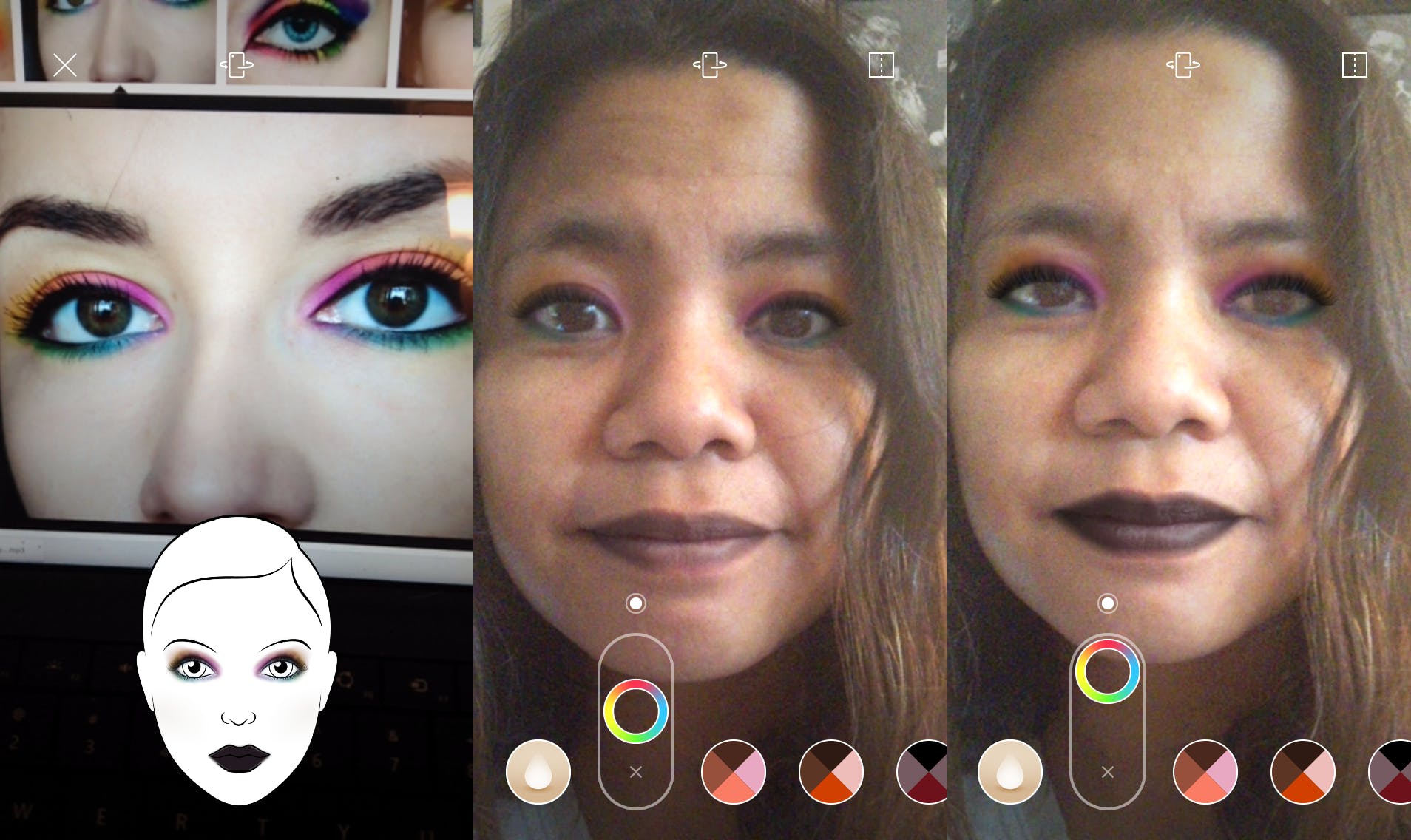 The good thing about this app? You can immediately see which looks work.

…and which ones clearly don’t.

If you don’t have a makeup reference in mind, you can also try out the app’s many color palettes, including one that automatically changes styles when you raise your eyebrows or pucker your lips. You can also try on a different eye color, eyebrow shape, and even digitally whiten teeth. 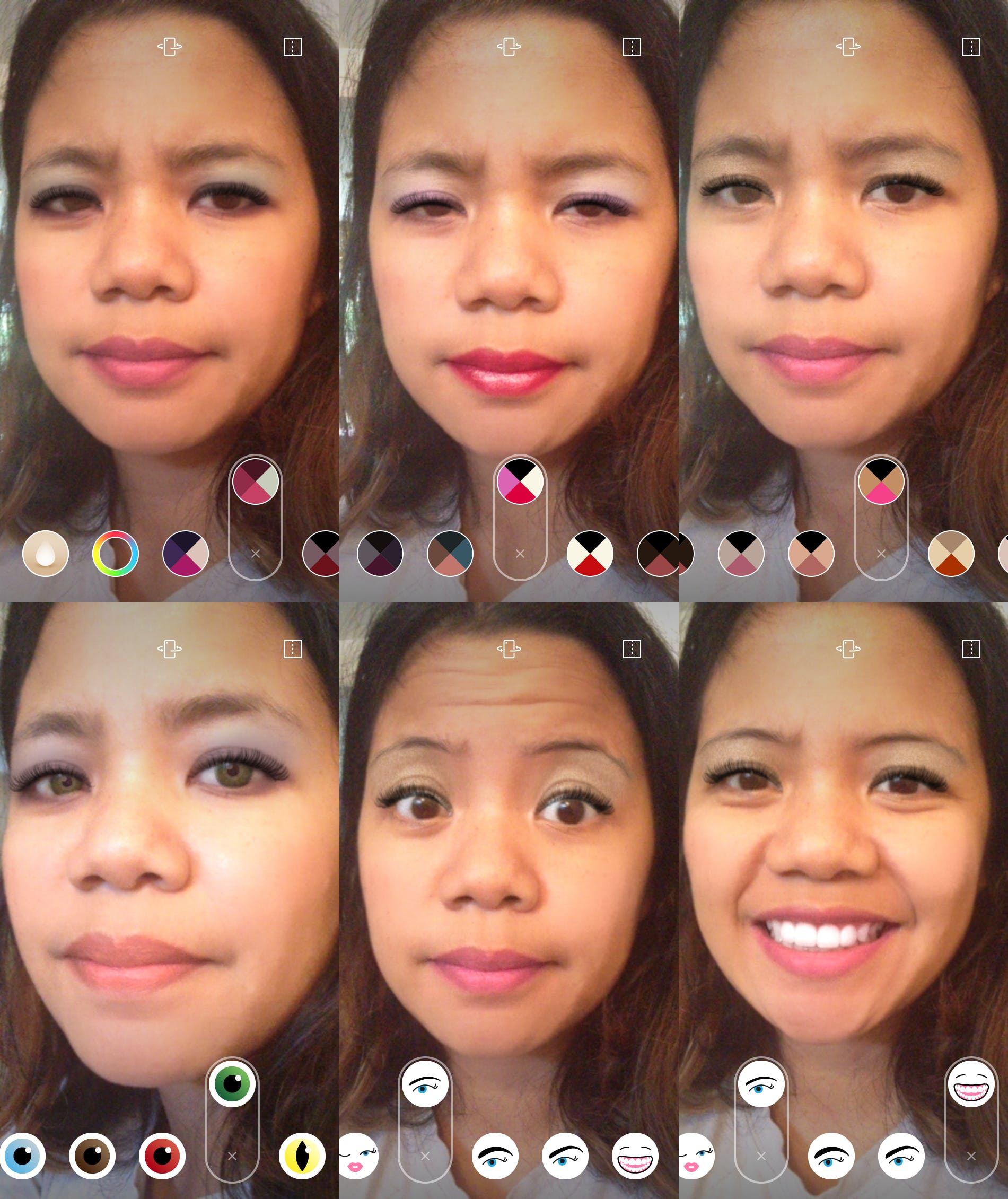 If you’d like to immortalize the look on your face, you can tap the capture button once to take a photo or keep it pressed to record a video.

ModiFace Live is now on iOS, and is slated to become available on additional platforms soon. The app’s Live Scan technology will also be rolling out with specific beauty brands and retailers within the next few weeks, with the first retail store interaction for consumers expected in September.