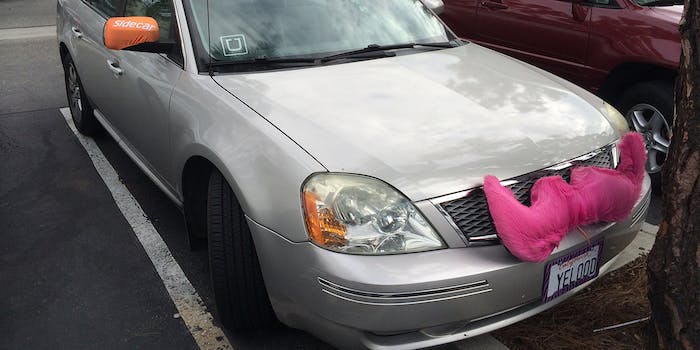 'The federal government does not have to lag behind-the-times with antiquated policies.'

It’s been nearly two years since ride-hailing app Uber announced it was serving a million rides per day. Along with its mustachioed competitor Lyft and regional upstarts like Get Me, apps allowing passengers to hop into the backseats of moderately-vetted strangers’ cars have become ubiquitous around globe and an important part of cities’ transportation networks.

Even so, for employees of the U.S. federal government, there’s been a major roadblock in using those transportation options for official business: not being able to get reimbursed for their travel expenses.

If, let’s say, someone at the Department of Housing and Urban Development rides in a standard taxicab or takes the subway on a work trip, they can get compensated for the expense. However, if they use Lyft, Uber—or even takes the healthiest, greenest option and hops on a bike from a city bike-sharing program—they can’t get paid back.

That may soon change.

Earlier this week, the House of Representatives passed the Modernizing Government Travel (MGT) Act, a bi-partiasn effort introduced by Reps. Will Hurd (R-Texas) and Seth Moulton (D-Mass.) that would expand approved transit options for federal employees to include ride-hailing and bike-sharing.

“The federal government does not have to lag behind-the-times with antiquated policies. With simple updates like the MGT Act, we can become more attractive as an employer, more efficient in getting people where they need to go, and save taxpayer dollars while doing so,” said Hurd, a former CIA agent who chairs the House IT Subcommittee, and has been an advocate for modernizing federal IT and embracing new technology. “This bill finally allows federal agencies to catch up with the private sector and moves the needle toward a more innovative and responsive government.”

“Uber is committed to providing reliable transportation at the push of a button for everyone, everywhere, including those working in the federal government,” added Niki Christoff, Uber’s head of federal affairs, in a statement.

U.S. officials have often been split when it comes to ride-hailing platforms. An analysis by the Center for Public Integrity found that, during the 2014 election cycle, federal lawmakers took 7,625 Uber rides, spending over $278,000 with a company.

At the same time, lawmakers have had concerns about many of these companies’ policies. “This bill allows federal workers to use a variety of passenger transportation options—Uber, Lyft, bike-share, taxicabs, liveries, buses. It doesn’t change the ongoing safety concerns with Uber and Lyft, namely their driver background checks,” Dave Sutton, spokesperson for the taxicab industry-backed, anti-ride-hailing group Who’s Driving You, said in an email to the Daily Dot.

While Uber and Lift run background checks on drivers before they can get behind the wheel and begin picking up passengers, those checks do not include fingerprinting. The companies have argued fingerprinting drivers would drag out onboarding time for new drivers and are discriminatory against minority communities with high arrest rates. However, some labor law experts suspect fingerprinting drivers would give drivers a stronger case to argue they’re actually employees of the companies, rather than contractors, and, therefore, would be eligible for benefits.

Last year, citing a string of high-profile sexual assaults of passengers by ride-hailing drivers, a handful of Democratic lawmakers sent a letter urging the major ride-hailing firms to implement fingerprint-based background checks as a safety precaution.

“While we understand your companies conduct private background checks when vetting potential drivers, you should take additional steps to increase the safety of your customers,” they wrote. “Specifically, we urge you to adopt comprehensive fingerprint-based background checks for new and existing drivers. With rapidly expanding operations in the United States, your companies have become part of the daily lives of many Americans. Following multiple instances of sexual assault by drivers hired to work in your industry, it is clear that there is an urgent need to improve screening standards currently in place.”

Before becoming law, the Modernizing Government Travel Act still needs to be passed by the Senate and signed by the president. A spokesperson for Hurd said they hope to see the Senate take up the legislation after it reconvenes after the November election.