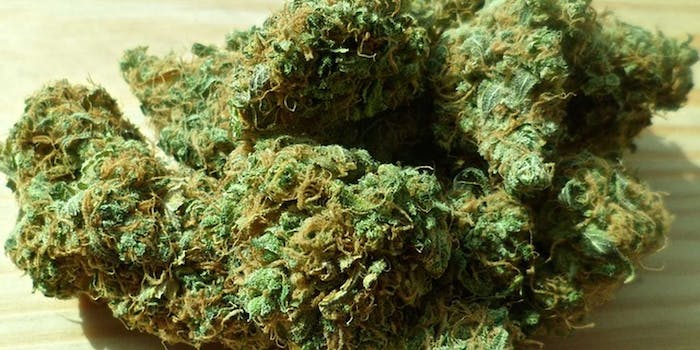 It's high time our veterans got the medicine they need.

Millions of people across the United States have access to legalized medical marijuana, but one class of Americans are prohibited from using the drug: military veterans.

Thanks to a recently introduced piece of legislation, however, that could soon change.

Since marijuana is still illegal at the federal level, doctors working for the Department of Veterans Affairs are prohibited from not only prescribing medical marijuana, but from even talking to their patients about it.

The Huffington Post’s Matt Ferner reports that a bill introduced in the House of Representatives earlier this week by Earl Blumenauer (D-Ore.) and Dana Rohrabacher (R-Calif.) aims to change that. The Veterans Equal Access Act would free up VA doctors to talk about marijuana with their patients who live states that have approved the use of medicinal cannabis.

Rohrabacher in a statement:

“Our antiquated drug laws must catch up with the real suffering of so many of our veterans. This is now a moral cause and a matter of supreme urgency. It is unconscionable that a VA doctor cannot offer a full range of treatments, including medical marijuana, which in many cases has been shown to have worked, to an American veteran who fought valiantly for our country. Conscience dictates that we not coldly ignore these desperate men and women, and that we remove government from its paternalistic stance between patient and doctor.”

Surprisingly for any piece of federal legislation proposed in 2014, the bill actually has broad bipartisan support. Among the 10 lawmakers who signed on to cosponsor the Veterans Equal Access Act, four are Democrats and six are Republicans.

A 2012 VA study found that 30 percent of veterans of the wars in Iraq and Afghanistan suffer from post-traumatic stress disorder (PTSD). A wealth of anecdotal evidence shows that medical marijuana provides considerable relief for victims of PTSD; however, actually conducting research to prove the connection has proved difficult.

Earlier this year, for example, a researcher at the University of Arizona was fired after finally winning federal approval for a study that would have investigated the effects smoking marijuana had on veterans with PTSD. The researcher told Vice that her termination was a direct result of political pressure put on the university by Republican politicians in Arizona.

An online petition to reinstate the professor has generated over 100,000 signatures.

While the VA has been unable to prescribe medical marijuana, USA Today reports that medical marijuana laws in a half-dozen states have allow for PTSD as a “qualifying condition” to receive a prescription for cannabis.

Even so, a large percentage of veterans get their health care exclusively through the VA, which is heavily subsidized by the federal government, so going outside of that system may either be difficult or simply not occur to them as an option.

“Post traumatic stress and traumatic brain injury are just as damaging and harmful as any injuries that are visible from the outside,” said Rep. Blumenauer in a statement. “Sometimes even more so because of the devastating effect they can have on a veteran’s family. We should be allowing these wounded warriors access to the medicine that will help them survive and thrive, including medical marijuana, not treating them like criminals and forcing them into the shadows. It’s shameful.”