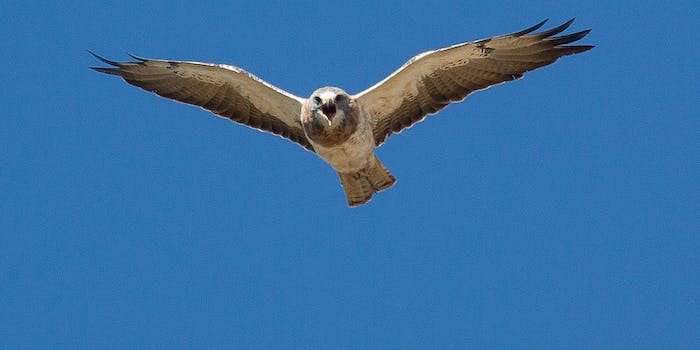 Drones are about to get buzzier.

A cutting-edge U.S. military research lab wants the next generation of drones to buzz across a battlefield like insects and gather intel with the watchful eyes of a hawk.

That’s the jist of the latest media release from the Defense Advanced Research Projects Agency (DARPA), which on Monday solicited input for its Fast Lightweight Autonomy (FLA) program.

According to DARPA, the program will develop “a new class of algorithms to enable small, unmanned aerial vehicles to quickly navigate a labyrinth of rooms, stairways and corridors or other obstacle-filled environments without a remote pilot.”

DARPA’s media release includes this video of a goshawk that demonstrates the combination of speed, agility, and perceptiveness that the military wants from its new drones.

DARPA aims to incorporate the code that comes out of this new program into drones “small enough to fit through an open window” that can fly as fast as 45 miles per hour.

Mark Micire, a program manager at the agency, said, “Birds of prey and flying insects exhibit the kinds of capabilities we want for small UAVs.”

As with many military research projects, the government is eying possible civilian uses for whatever comes out of FLA. DARPA’s media release stressed land and sea applications in areas where GPS signals are weak and operator control is thus difficult to maintain. Stefanie Tompkins, director of the Defense Sciences Office at DARPA, cited “urban and disaster relief operations” as “key beneficiaries.”

Photo via David A Mitchell/Flickr (CC BY 2.0)