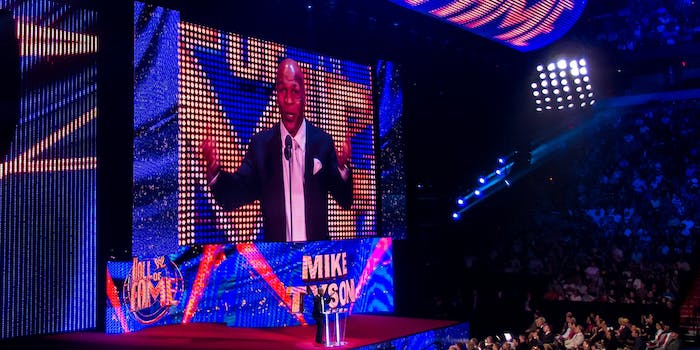 But other big celebrities may still attend.

Iron Mike Tyson was not asked to speak at the Convention though I'm sure he would do a good job if he was. The media makes everything up!

Trump’s tweet seemingly comes as a response to a Bloomberg Politics story which claimed that Tyson, among many other big-name celebrities, were invited to speak at the convention. Although Tyson may not be making an appearance, Bloomberg reports that people familiar with the planning told them that Mike Ditka, Bobby Knight, and Brian France are expected to attend.

While addressing a crowd in Virginia in early June, Trump said he wanted to bring big-name sports celebrities to the conventions, specifically Tom Brady and Ben Roethlisberger. Later reports said that Roethlisberger would not be attending the convention, nor endorsing Trump. There is no report on whether Brady will speak at the convention.

Roethlisberger told me he will not attend the Republican convention and will nor endorse nor speak for the candidate.

The New York Times first reported, on June 11, that Trump said he wanted to bring celebrities, rather than politicians, to the convention.

“We’re going to do it a little different, if it’s O.K.,” Trump said, according to the Times. “I’m thinking about getting some of the great sports people who like me a lot.”

After regaling the crowd with the long story of how he successfully courted the endorsement of Bobby Knight, the former Indiana University basketball coach, Mr. Trump rattled off a list of other names of sports figures who he said have supported him. According to the candidate, he also has the support of the star quarterbacks Tom Brady and Ben Roethlisberger; Brian France, the chief executive of Nascar; and Dana White, the president of Ultimate Fighting Championship.

While Tyson may not attend the Republican National Convention, he has historically expressed support for Trump’s candidacy. In April 2015, Tyson spoke to HuffPost Live where he explained why he would vote for Trump in the upcoming election.

“Let’s try something new. Let’s run America like a business, where no colors matter. Whoever can do the job, gets the job,” Tyson said. “He should be president of the United States. … I would [endorse him], yeah. I like Trump.”

“We’re the same guy,” Tyson said of Trump in January 2016 to the Daily Beast. “A thrust for power, a drive for power. Whatever field we’re in, we need power in that field. That’s just who we are. Balls of energy. We’re not even who we think we are. We’re fire. We’re made of this crap — water, motion, dirt, diamonds, emeralds. We’re made out of that stuff, can you believe it?”

At an Indianapolis campaign rally in April, Trump boasted of Tyson’s endorsement: “I love it, he sent out a tweet. Mike. Iron Mike. You know, all the tough guys endorse me. I like that, okay?”

Trump’s comments drew criticism from many who recalled a rape Tyson committed. In 1992, Tyson served three years in prison following his conviction for the rape of 18-year-old Desiree Washington, a contestant in the Miss Black America pageant.

As of publication, neither the Trump campaign nor the GOP convention team have responded to our requests for comment.