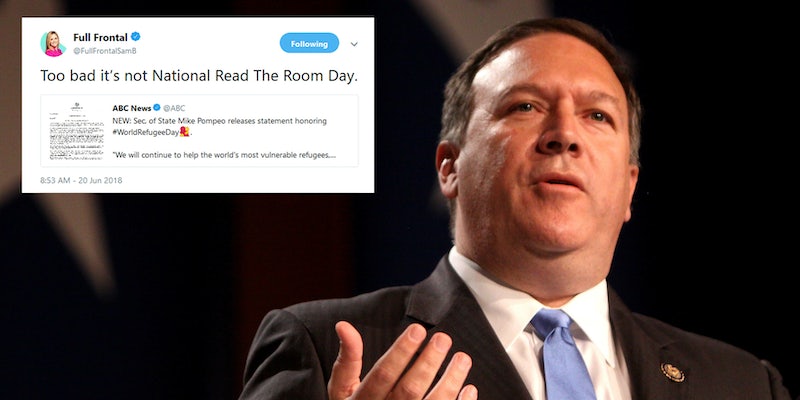 Secretary of State Mike Pompeo released a statement on Wednesday commemorating World Refugee Day, a move that was widely mocked as the Trump administration’s policy of separating undocumented children from their families has been criticized.

In the statement Pompeo highlighted the “strength, courage, and resilience of millions of refugees worldwide who have been forced to flee their homes due to persecution and conflict.”

The secretary of state also said the United States would “continue to help the world’s most vulnerable refugees, reflecting the deeply held values of the American people.”

"We will continue to help the world's most vulnerable refugees, reflecting the deeply held values of the American people." https://t.co/AODT0Yd5pI pic.twitter.com/SgBBDqEn4v

“The United States will continue to be a world leader in providing humanitarian assistance and working to forge political solutions to the underlying conflicts that drive displacement,” he wrote.

In the past several weeks, a growing voice of criticism has been levied against the Trump administration for their policy of separating children from their families at detention centers along the country’s southern border.

Mike Pompeo tried to celebrate National Refugee Day with a straight face, but he just couldn't do it. pic.twitter.com/dBdkpyF0vz

So, today is world refugee day and good ole Mike Pompeo at this to say, "We will continue to help the world's most vulnerable refugees, reflecting the deeply held values of the American people." Ain’t that some shit?!

"On World Refugee Day, we join the United Nations High Commissioner for Refugees…"

… and that's about as far as I could get before all of my organs turned into bile.

Mike Pompeo wins the Gaslighting award of the month for most ironic use of World Refugee Day(while his govt is separating refugee kids from mothers). Trump will be jealous … https://t.co/uRTEeySDI5

Too bad it’s not National Read The Room Day.https://t.co/ukMkjBto1N

While it is important to recognize the difficulties facing refugees across the country, the timing could not have been worse for Pompeo’s statement.

It’s not the first time this week the State Department came across as tone-deaf, as a live chat on Family Travel Hacks! was skewered.