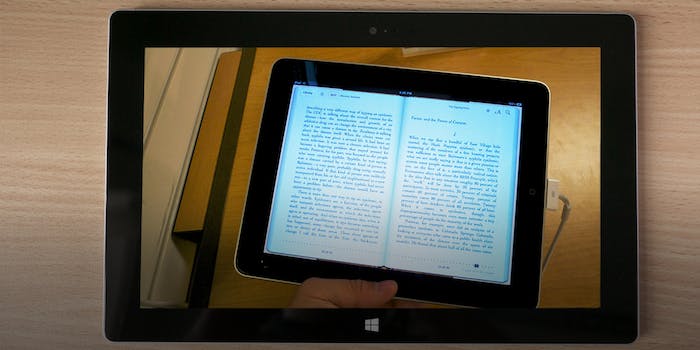 An iPad by any other name.

Can you imagine how hard it is to be an adhesive bandage manufacturer? I don’t mean to suggest that actually creating the product is hard—in fact, I have to imagine it’s one of the simplest things there is to produce. The hard part would be getting customers to call your product anything other than “band-aids.”

Band-Aid is a brand of adhesive bandages, but like Kleenex, Q-Tip and Xerox, its name has become an accepted replacement for the product itself. It’s called a “generic trademark,” and it’s a branding nightmare for competitors. That’s the position Microsoft is in right now with its Surface tablet and the NFL.

Football games have become the battleground for Microsoft as it attempts to get people to take the Surface seriously. In a massive deal worth a reported $400 million dollars, the company is pushing its tablets into broadcast booths and onto the sidelines of NFL games. What Microsoft might not have anticipated prior to inking the deal was that “iPad” has become the generic trademark for all tablets, and no amount of money is likely to change that.

Problems began to surface (no pun intended) after the first week of NFL games, as commentators began calling Microsoft’s Surface tablets by the moniker of their main competitor. It even happened during the week’s nationally-televised Monday Night Football matchup when ESPN’s football analyst and former quarterback Trent Dilfer called the tablets “iPads.”

It was a nightmare situation for Microsoft—not only was the almost-half-a-billion-dollar deal not working as intended, but Apple was the one getting credit for bringing the NFL into the 21st century. Microsoft has since done its best to make it clear that it is the NFL’s official tablet sponsor, even going so far as to coach the color commentators and NFL TV personalities on how to spot a Microsoft tablet.

Oh, and they’ve also done everything they can to make sure the viewers know what the tablets are, too. For example, here’s a photo of FOX NFL Sunday’s weekly wrap-up show, taken from last season, before the Microsoft deal: 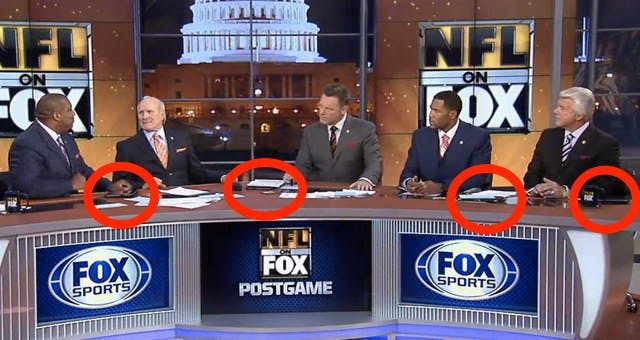 It’s not hard to spot the tablets on the table, and given their shiny aluminum casings and overall size and shape, I’d be willing to bet highly on the being iPads. They’re laying flat, as you would assume for a tablet in use, and they’re within just a few inches of each analyst. Clearly they are personal devices they use to do their jobs. By contrast, here’s a shot of the same show, taken from the current NFL season: 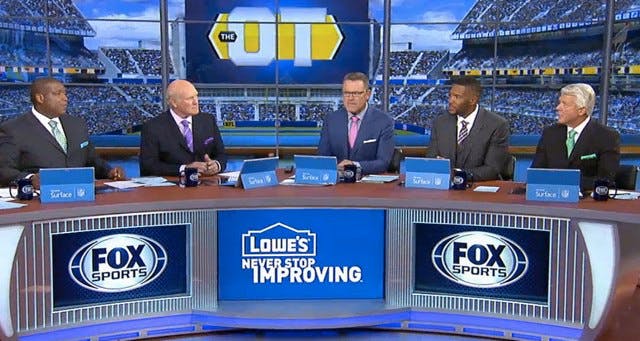 You have to give Microsoft credit for being bold, but it’s also an out-of-touch and transparently desperate attempt to get the viewer to stare at the tablets instead of the guys doing the talking. Most of the tablets themselves are pushed out near the edge of the table, well out of arm’s reach, and it’s not hard to believe that most or all of the men at the desk have their iPads tucked away beneath the view of the camera, as they’re clearly not using the Microsoft-provided tablets for anything other than paperweights.

A quick check of recent tweets from four of the five hosts (Howie Long doesn’t maintain a Twitter account) reveals that they use either the iOS Twitter client, Twitter for iPad, or Echofon (a Twitter app for iOS and Android, not available on Windows) to post their social updates. No surprise there.

This forced usage via exclusive “official” sponsorship hurts Microsoft more than it helps. By forcing these tablets onto the screen at every opportunity, the company is getting far more bad press than good, and every article poking fun at the Surface tablet for being called an iPad on national TV reminds every reader which device is winning the sales war.