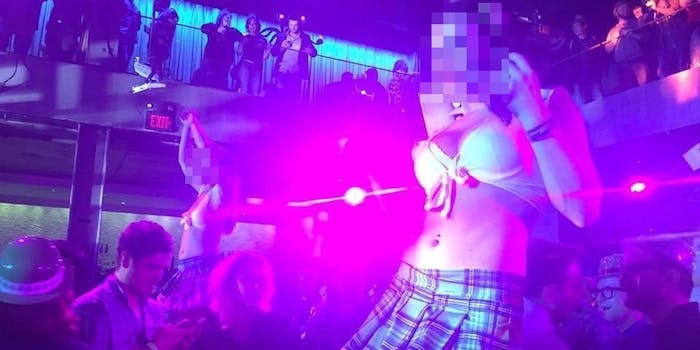 The company got schooled on social media.

On Thursday, Microsoft hosted its Women in Gaming Luncheon at Game Developers Conference (GDC) in San Francisco. Hours after the event let out, the computing giant undermined its efforts by hosting an afterparty that featured scantily clad women in school girl outfits.

The incident was highlighted by Kamina Vincent, editor at Tin Man Games, when she shared on Twitter photos of the event taken by her friend who was in attendance. The original photos have since been removed from her feed and replaced with blurred images to protect the identity of the dancers.

They were dancing on podiums.

(Deleted originals to blur faces of the dancers) pic.twitter.com/pG1BxmtbnO

Someone sent me photos and and an OH: "We've got the best spot in the house, don't we?"

Other images from the event have also cropped up across social media, including an Instagram post from Rock Pocket Games Art Director Henning Ludvigsen, who captioned his post with “Great fun at the Microsoft Xbox party with a million geeks!”

Ivan Moen, collegue of Ludvigsen and founder of Rock Pocket Games, also shared a video from the event on his Instagram.

The situation didn’t sit well with many in attendance and who learned of the happenings on social media. Brianna Wu, the head of development at Giant Spacekat, took to Twitter to express her disappointment with the situation.

It wasn’t just developers who were upset with the decision; Microsoft employees also expressed their dismay. Microsoft Games Market Head Aaron Greenberg said he was “very disappointed” to learn of what took place at the event.

In response to the party, Head of Xbox Phil Spencer issued a statement to the Daily Dot:

At Xbox-hosted events at GDC this past week, we represented Xbox and Microsoft in a way that was not consistent or aligned to our values. It was unequivocally wrong and will not be tolerated. I know we disappointed many people and I’m personally committed to holding ourselves to higher standards. We must ensure that diversity and inclusion are central to our everyday business and core values. We will do better in the future.

While the Xbox-sponsored party was not an official GDC event—and it’s not clear if the women dancing at the event were hired by Microsoft specifically for that purpose or work for the venue—it’s not a particularly good look for the same company that had just hosted its 15th annual Women in Gaming Luncheon to put its name on an event that prominently featured women apparently there to serve as eye candy for men.

The move runs contrary to Microsoft’s ongoing efforts to improve diversity within its company—and even appears to undercut policies in place for an event hosted by the company earlier in the week.

During an annual event called That Party hosted on Wednesday night and sponsored by [email protected], Microsoft’s program for independent game developers, a Safe Spaces Policy was instituted.

“If something or someone makes you feel uncomfortable at one of our events, no matter how minor it seems, you can report it to us,” the policy stated. “Harassment of event participants, staff or volunteers at the event will not be tolerated.” The policy goes on to define a variety of types of harassment, including offensive verbal comments or attitudes related to “gender, gender identity and expression, sexual orientation …inappropriate physical contact, and unwelcome sexual attention.”

According to the most recent demographic figures published by the company, just 26.8 percent of Microsoft employees are women—including only 17.3 percent of leadership positions.