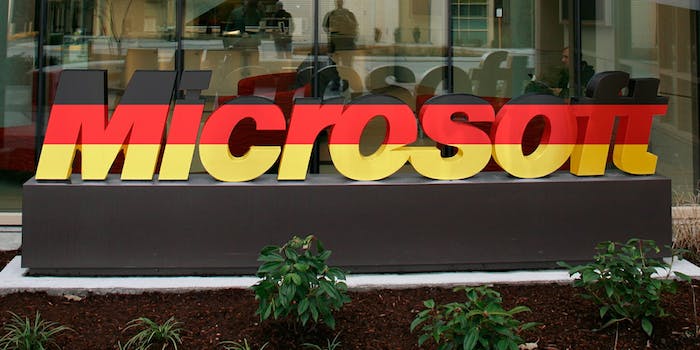 The first company implicated in the NSA's PRISM program is looking for ways out.

Microsoft will open data centers in Europe, making it harder for U.S. authorities to reach the data in their investigations.

The tech giant will partner with German firm Deutsche Telekom AG to give customers in 32 European countries the option to host their cloud services in Germany, Reuters reported.

U.S. agencies can only obtain warrants to search facilities—physical and digital—on American soil, meaning that the new servers are effectively outside of the U.S. government’s jurisdiction.

One of the first programs disclosed in the 2013 leaks by former National Security Agency contractor Edward Snowden was PRISM, which enabled the NSA to easily access customer information held by a number of tech companies who hosted their servers in the United States. According to one NSA slide, Microsoft was the first company to participate in PRISM.

Experts say that the fallout from the Snowden leaks—including rising distrust of American tech companies—could cost those companies more than $35 billion.

Microsoft did not immediately respond to a request for comment about whether its decision to set up European servers was a direct response to NSA surveillance. But experts told Reuters that that was almost certainly the case—and that other U.S. companies might follow Microsoft’s lead.

Microsoft also announced Tuesday that it will offer its U.K. customers the option to store their data in their own country, although the NSA’s U.K. counterpart, the Government Communications Headquarters (GCHQ), has faced criticism from Snowden himself for being “worse than the U.S.” when it comes violating citizens’ privacy.

Photo by Robert Scoble/Flickr (CC BY 2.0) | Remix by Jason Reed