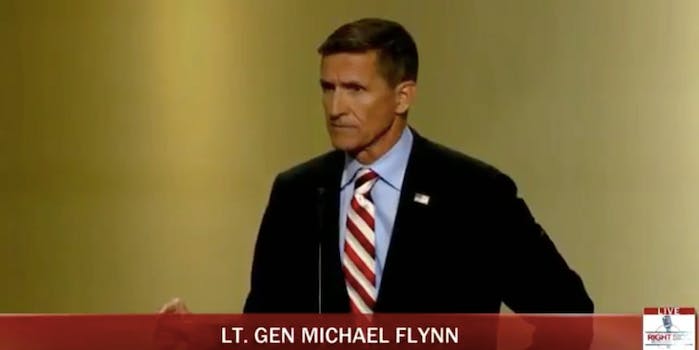 'If I did a tenth of what she did, I would be in jail today.'

Truthful or not, Donald Trump and his surrogates’ enthusiastic branding of Hillary Clinton as criminally malevolent for her handling of classified materials while secretary of state was an extremely effective tactic during the 2016 campaign.

It hit its zenith at the Republican National Convention when multiple speakers argued for the jailing of Clinton, the argument being that federal law is potentially a criminal offense.

Curious what Flynn’s stance is on people who do things that are potentially a criminal offense?

Here’s the full text of the clip.

We do not need a reckless president who believes she is above the law. Lock her up, that’s right. Yea, that’s right, Lock her up. I’m gonna tell you what. It’s unbelievable. It’s unbelievable. Yea. I use hashtag Never Hillary, that’s what I use. I have called on Hillary Clinton, I have called on Hillary Clinton to drop out of the race, because she, she put our nation’s security at extremely high risk with her careless use of a private email server. Lock her up, lock her up. You guys are good, damn right, exactly right, there’s nothing wrong with that. And you know why, and you know why, you know why we’re saying that? We’re saying that because if I, a guy who knows this business, if I did a tenth, a tenth, of what she did, I would be in jail today.

The irony wasn’t lost on those sharing the clip on Twitter.

hmmmm, “a 1/10th of what she did” aye? #byhisownlogicheshouldbeinjail