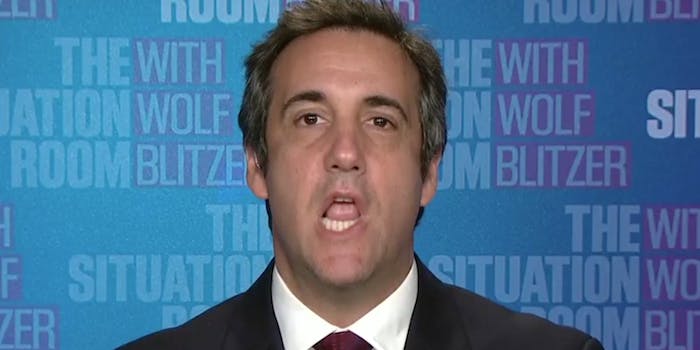 It's the return of David Dennison.

Michael Cohen, President Donald Trump‘s lawyer and fixer, is being accused of helping a top Republican official pay off a former Playboy model the official impregnated.

According to the Wall Street Journal, Cohen helped arrange a payment for Elliott Broidy, who is a deputy finance chairman with the Republican National Committee, for $1.6 million.

Cohen recently confessed to paying former adult film star Stormy Daniels $130,000 to allegedly keep quiet about an affair the president had with her back in 2006.

In a statement to the Wall Street Journal, Broidy confirmed the affair and the monetary payments.

“I acknowledge I had a consensual relationship with a Playboy Playmate. At the end of our relationship, this woman shared with me that she was pregnant. She alone decided that she did not want to continue with the pregnancy and I offered to help her financially during this difficult period,” Brody wrote.

A person familiar with the agreement between Broidy and the woman, who was not identified, said Cohen used the same pseudonyms he made for Trump and Daniels. Broidy is identified as David Dennison, and the unidentified woman is Peggy Peterson.

Cohen’s offices were raided on Monday by the FBI, who is reportedly investigating possible bank fraud committed by Cohen as well as violations of election law.

Cohen and Broidy worked together at the RNC, after both being appointed in April 2017 by Trump.

You can read the Wall Street Journal‘s story here.