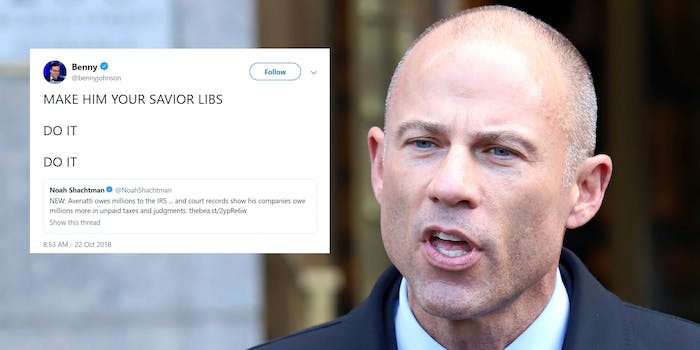 Michael Avenatti, one of President Donald Trump‘s most public foes and a longshot 2020 Democratic presidential nominee, is facing scrutiny today after a report about the lavish lifestyle he lived while evading taxes for years.

According to the Daily Beast, Avenatti at one point owed at least $1.2 million to the IRS, as well as a larger corporate debt from taxes his law firm didn’t pay. All the while, Avenatti enjoyed “international and domestic travel via private jet, and [had] a collection of art and exotic cars.”

Did you pay your 10 million dollar tax bill with all these “wins” CPL?

Go away #CPL! You let stormy down. #VoteRedMidterms2018 your own wife despises you. Pay your taxes!

As I sad, sleazebag. I don't care that he gives Trump a hard time, doesn't mean we should admire him https://t.co/3LwRIL0he3

They’re also suddenly eager to talk about him as a 2020 candidate, so it can blow up in his face.

MAKE HIM YOUR SAVIOR LIBS

As with anything though, this sudden outrage over a possible political candidate engaging in shady taxes practices is ironic at best.

Just this month, a years-long investigation by the New York Times revealed Trump engaged in tax fraud and deception that prevented the federal government from fairly taxing his assets throughout his life, on a scale far greater than anything Avenatti is accused of.

And that didn’t stop him from barnstorming a U.S. election. So maybe conservatives should be careful what they wish for.

Avenatti told the Daily Beast that the debts to the IRS have been “fully paid.”