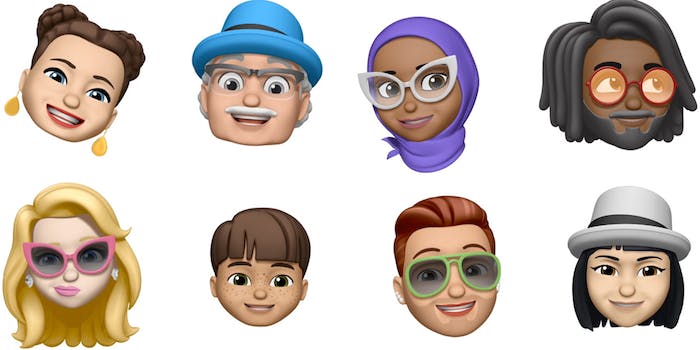 At its Worldwide Developers Conference (WWDC) Monday morning, Apple unveiled a number of notable updates to iOS, Mac, and the Apple Watch. And while things like automatic activity tracking or macOS Mojave are important, it’s another smaller upgrade that may be drumming up the biggest post-WWDC stir: Memoji. So, exactly what are Memoji?

Memoji are Apple’s new take on Animoji. It’s a customizable avatar that animates based on your real-life facial expressions, just like Animoji do—except it’s a cartoon rendering of your face. (Apple also updated its facial recognition system to identify tongues, for additional digital facial expression options.)

Samsung actually recently tried its hand at a similar feature, AR Emoji, on the Galaxy S9, but many found the digital renderings fell into the uncanny valley—or were just plain creepy. Apple seems to be getting around this issue by keeping its Memoji less realistic and more Bitmoji-like.

To create a Memoji, when it debuts in iOS 12 later this year, you’ll head to where you would normally pick an Animoji, then swipe to the right. There, tap the add button to build your personalized Memoji from scratch. You can choose from a variety of skin tones, hair colors, styles, and accessories such as earrings or glasses. Once you’ve customized it to your satisfaction, you can save your Memoji and use it in Messages or in FaceTime videos or selfies.

People on Twitter had a lot to say about it. Some pointed out its similarities to Nintendo Mii and other personalized avatars (although clearly, it’s a lot more detailed).

Others highlighted the curious discrepancies between the goals Apple was working towards in its iOS updates.

Apple five minutes ago: We want people to be more responsible with their time and their phones.

Others found the obvious benefits Memoji will have to their digital communications.

And naturally, after playing around with the new feature, some Memoji skeptics loved the result.

Me moments after making my Memoji: pic.twitter.com/IwRFX6vFAu

Apple introduced a handful of new Animoji to the mix as well, including a koala, dinosaur, ghost, and tiger. All of these updates will ship with iOS 12 when it lands sometime this fall.